The (Ex)Secretary’s Speech: Jobs Plans, Unemployment And Illusions of the Future. 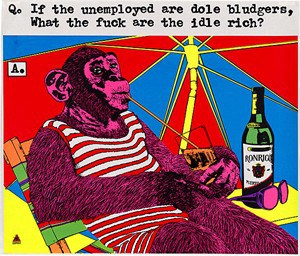 To my friends in the union movement I say this: Every worker needs a successful company. To the business community I say this: No company is successful without an engaged, energised and motivated workforce.(Howes 2014)

This post was meant to be short and to the point – but it has really run away from me. The point of it is to use Paul Howes’ speech as part of a broader critique of the common-sense of the Left in Australia: that some kind of ‘capitalism with a human face’ is possible and that a set of policy options, specifically a jobs plan, could achieve this goal(Žižek 2000, 63). I want to show that Howes’ speech is the truth of such a claim and such a claim is both impossible and undesirable. Simply put such arguments fail to take into account the profound global crisis of capitalism. Thus the future such proponents imagine is a mystification. There is little chance of normality ahead of us, if by normality we mean the relative growth, prosperity and stability of capitalism in Australia post-WWII in both its social democratic and neoliberal forms.

This critique is aimed not only at the mandarins of the ALP nor the cretins of the centre-left commentariat but also at activists and the Far Left who continue to parrot such positions even if they add a radical gloss. There are no greater fools than those supposed anti-capitalists who believe that tailing social democratic illusions is a step on a torturous road to proletarian enlightenment. The truth is such a road never reaches its destination: it’s an endless illusion.

In discussions with comrades the use of various social democratic demands and slogans is often justified by an argument that goes this is where ‘the workers’ are at and we want to connect with ‘the workers’. However to my knowledge there is never any research that actually establishes this is what workers want, no mass investigation, no discussion groups, no militant inquiry: no one ever asks them their thoughts. Rather such an understanding is an assumption built on an ideological image of the working class that exists only in the minds of certain socialists. On the flip side these comrades who are workers themselves sublimate their own rebellious desires whilst hunting this ideological figment.

I also want to be crystal clear. My argument isn’t that we shouldn’t resist sackings, restructuring or privatisations or that we shouldn’t attempt to increase our wages and reduce our work. Far from it. My argument is against the idea that we can organise politically, focused on the state, to coordinate the generation of more employment as part of a return to some form of social democracy. Such a goal is neither possible nor desirable. Read more at … The (Ex)Secretary’s Speech: Jobs Plans, Unemployment And Illusions of the Future..

This entry was posted in Unions, Workers Political Organisations. Bookmark the permalink.

2 responses to “The (Ex)Secretary’s Speech: Jobs Plans, Unemployment And Illusions of the Future.”