Pine Gap 4 have won their Appeal!

It was a unanimous decision by the full bench of the Northern Territory Court of Criminal Appeal.

The three judges agreed with our submission that there was a miscarriage of justice at last year’s trial because we were not able to bring evidence before the jury about the function of Pine Gap.

There were other grounds to the appeal, of a more technical nature. The judges will publish the detailed reasons for their decision in coming weeks.

The Prosecution quickly sought a re-trial, but was quickly rebutted.

“What would be achieved for these individuals or the community if there is a re-trial?” asked Justice Riley rather sternly.

The judges unanimously ruled there would be no re-trial.

The fact that we had already served prison time was a significant factor in their decision to refuse a re-trial. We are all very glad we did this as now our slate is clean regarding the other charge of ‘damage’, under the crimes act. So now it’s all over! 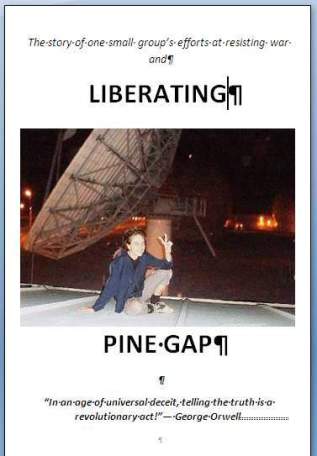 This ‘David vs Goliath’ outcome is a result of the excellent work of our legal team: Ron Merkel QC, Rowena Orr and Russell Goldflam. Their commitment, persistence and brilliance was amazing. They should be heartily congratulated. (I hope to have a way for you all to do that soon).

The result now raises significant questions for the Government about the use of the Defence (Special Undertakings) Act 1952. It was the first, and mostly likely last time it will be used in this context.

It is a victory for fairness and common sense, and a slap in the face for Prosecutor’s who seek to use draconian legislation to respond to pacifists partaking in non-violent civil disobedience with an extreme witchunt.

Congratulations to our Pine Gap colleagues Jessica Morrison and Sean O’Reilly and thanks to everyone involved in our journey since December 2005.

It’s been an amazing experience for all of us!

PS: Within 10 minutes of the ruling there was national media coverage on most major newspaper websites as well as ABC Radio and TV.

PPS: Some pics to come, news reports below

See also the pamphlet published by the PG4:

The Territory’s Court of Criminal Appeal has quashed the convictions of four protesters who broke into the Pine Gap defence facility three years ago.

Last year, Bryan Law, Adele Goldie, Jim Dowling and Donna Mulhearn were found guilty of breaking into the spy base using wire cutters in the Northern Territory Supreme Court in Alice Springs. They were the first people to be charged under the Defence Special Undertakings Act of 1952. The foursome were fined a total of $3,000.

They appealed against their convictions, and today the Territory’s full Court of Criminal Appeal found in their favour.

It’s now off to the Director of Public Prosecutions to decide whether to pursue a retrial or drop the matter.

Minor convictions for trespass and criminal damage will still stand.

This entry was posted in News and tagged Democratic Rights, No War, Pamphlet. Bookmark the permalink.

9 responses to “Pine Gap 4 have won their Appeal!”