Delta Compound has gone 24 hours without drinking water, after
Transfield removed the water bottles from outside the fence.
Pictures attached show Delta detainees catching rainwater to try and
relieve the water shortage on Monday 20 January. Also pictured are
slogans inside Delta proclaiming their peaceful protest.

“Depriving the asylum seekers of water is simply barbaric,” said Ian
Rintoul, spokesperson for the Refugee Action Coalition. “It is wildly
reckless of the immigration department to deprive asylum seekers of
water. Watching Delta Compound is reminiscent of a medieval siege, as
Immigration draws a metaphorical noose tighter around the compound,
waiting until thirst takes its inevitable toll.” 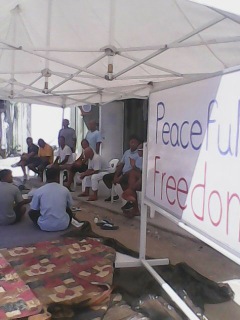 “The Minister is trying to create a phoney crisis by depicting the
detainees as ‘aggressive”. There is no evidence for that. There are
no threats by asylum seekers against staff. The threats are being made
by security and immigration staff against asylum seekers.”
“The protests have always been entirely peaceful. The Minister seems
to be creating a pretext for the use of force against the asylum
seekers.

“At 2.30 Manus Island time, all Transfield staff were ordered to
withdraw from Foxtrot Compound. Security staff have been patrolling
Foxtrot Compound with impunity since early last night (Sunday). 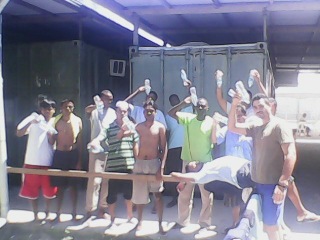 “Tragically, there are more self-harm incidents. Five asylum seekers
self-harmed by drinking shampoo; one of them has been medivacced to
Port Moresby for emergency treatment.”

“Manus Island is a disaster in progress with greater tragedy waiting
to happen. Reckless comments from the Minister don’t help. Peter
Dutton has tried to blame everything but the government’s own
policies.

“The asylum seekers have a genuine fear for their physical safety.
Safe resettlement on manus or in PNG is impossible. Until that is
addressed the protests will continue.”