A question arises from the ‘not guilty’ verdict handed down in Brisbane Magistrate Court today:

How does this verdict affect the question that Jagera land in the southern end of Musgrave Park should be used ‘for aboriginal purpose’ as specified on the title deed and the deed-of-grant-in-trust? 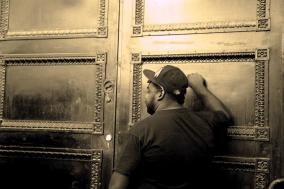 It is time for the Brisbane City Council to accept the importance of Musgrave Park and its role in the political and community life of Brisbane — that its importance derives from the sovereignty of first nations people. Lord Mayor Quirk’s failure to recognise this demonstrates how far from reality he and the developers he represents are from people’s needs in this public space.

In a repeat of the police case of May 2012 against the sovereign tent embassy in Musgrave Park, Brisbane, police entered no evidence on the latest set of charges.

The trial resumed today (11 mar 2013) against the ‘three embers of sovereign rights’ (name given to the three by one of the police prosecutors) — coco, hamish and boe. The courage, good sense and determination of these three should not be underestimated. They were banned from attending the sacred fire by a condition of the bail act. They spent their time during embassy meetings in ‘naughty corner’, as Aunty Karen called it. Their lawyer, Andrew Preston, can notch up yet another sweet victory against the racists and their armed militia, the Queensland Police force.

Eventually the three were released from that bail condition with another imposed, that they could not take part in the ceremony of the sacred fire. This flies in the face of all fairness and justice – the magistrate should be held accountable for this order.

The three were charged under the police powers and responsibility act.  Police used their ‘move-on powers’ to remove the three  from the sacred fire. Their legal defence  to the charges was as follows:

‘The land (pictured above) is currently leased to the State of Queensland and is designated for ‘aboriginal purposes and no other purposes whatsoever’.

Council officers knew this but maintained that Council had authority to put out the sacred fire despite opposition from traditional owners.

As the letter states it is not the purpose of Heath Safety and Amenity Local Law 2009 to prevent the carrying-on of aboriginal social, cultural, educational business that occurs at tent embassy meetings and functions.

Nor is it the prerogative of the Brisbane City Council to say what should occur on that land. Brisbane City Council gave up that right when it leased the land to the State of Queensland in order that the land could be used for ‘aboriginal purpose and no other purpose whatsoever’. The compliance officers seem to think that the land is part of a public park. It is not, it is a grant-of-land in fee simple i.e. it is private land.

Under these circumstances the magistrate was forced today to find the three embers ‘not guilty’.

Native title defunct
However this case is part of a broader political struggle for land rights in Musgrave Park.

Native title has failed to deliver justice to the traditional owners.Just look at how the Federal Court dismissed native title claims by Des Sandi! Don’t feel bad about that Des, look at the injustice meted out to the Yorta Yorta people using the native title act.

Attempts by the previous Labor Government to build a cultural centre have come to naught with a previous attorney general, matt foley, saying that ‘it was a shame’ that the cultural centre was never built.

The current government has taken monies allocated by Matt Foley and applied them to other less important purposes.

The Aboriginal and Torres Strait Islander Legal Service recently advised another defender of the tent embassy to plead guilty on the basis that he had no defence.

The charge police applied on that occasion was assaulting a public officer – the question is this:

Is it the duty of a public officer to remove aboriginal people from Musgrave Park – a traditional place of gathering?

Both police and council did not call elders to put a face to their claims that aboriginal traditional owners did not want the tent embassy. Wide support from various families with claims to the land was given on Invasion Day to the sacred fire and the tent embassy. As proof of their intentions traditional owners conducted the ceremony. But it is not for any individual or any group to say what an aboriginal purpose is. We have past millenia to tell us what the first nations people did to manage and to respect this land.

The verdict in court today (11 Mar 2013)  reflects the result of the previous charges on 16 may 2012 against 32 people defending the sacred fire. Supporters of the Brisbane Aboriginal Sovereign Embassy gathered outside the Brisbane Magistrates Court today as three Embassy warriors go to trial for defending the Sacred Fire.

Coco, Boe and Hamish were arrested on December 12 when the Brisbane City Council and over 80 police forcibly evicted the Embassy and desecrated the Sacred Fire.

”It is outrageous that these draconian measures have prevented us from carrying out our cultural and religious practice and our responsibility to our people” said Wayne Wharton.

Despite the eviction of the Embassy on December 12 and the continued harassment by police and Brisbane City Council, the Sacred Fire continues to be re-lit and Embassy meetings held every Wednesday at 6pm.

“The Embassy and the Sovereignty movement give our people strength. That is what the colonial authorities are afraid of and that is why we have a responsibility to keep fighting. The campaign to practice our religion and our law is the final campaign that we as First Nations people and our countrymen, the new arrivals, have to deal with. The question of sovereignty is neither a white or black question, it is an Australian question. It is an Australian question that must be answered by all people who call this country home”.

Analysis
The charges against tent embassy arising from 12 Dec 2012 has been decided but this leaves the question about the land being ‘for aboriginal purpose’ unanswered.
These charges related to police powers and responsibilities and not to Brisbane City Council (BCC) authority under health safety and amenity local law (2009) relating to the lighting and maintenance of the sacred fire.
There is little doubt that council has the power to enter the Deed-of-grant-in-trust (DOGIT) lease in Musgrave Park even though it is private land leased to the state of Queensland under the title deed .
The key question is that the land is ‘for aboriginal purpose’ and that both council & police should accept that .
BCC can help maintain the park but should not interfere with aboriginal ceremonies like smoking ceremony or political, social and cultural gatherings.
Both BCC & police should not be able to use Paniyiri Greek Festival  to evict aboriginal people and their supporters as they did on 16 May 2012.
Magistrates will be reluctant to rule on whether a title deed that specifies ‘for aboriginal purpose’ overrules BCC power to enter deed of grant in trust land or police to use move-on powers.
They’ll leave that to the high court.

The Struggle for Musgrave Park

The Case against Homer – standing up for first nations | Workers …

One response to “Sacred fire burns in Musgrave Park!”