Posted on December 23, 2012 by Workers BushTelegraph | Leave a comment 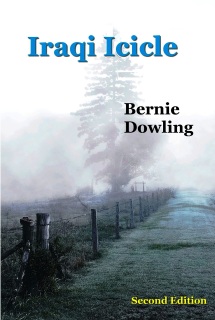 4.0 out of 5 stars
Iraqi Icicle by Bernie Dowling, 22 Dec 2012
Interesting theatrical, musical and political diversions
By
Kathy Hennessy – See all my reviews
This review is from: http://btfy.me/cfbtw9
I ENJOYED this story and I liked the main character, Steel Hill, who delivers as a first person narrator.

We start in Brisbane, Australia, where the story is focused initially on low-life betting scammers. But gradually we move on through an interesting cast of characters.

The narrator, Steele Hill, is involved with an intellectually enhanced Natalie, whose 16-year-old sister Jane – aka Bub – effortlessly entices him into an energetic copulation.
The genre is set in a low-life betting and corrupt police situation where a dumb Irish and a nasty German pair of cops attempt to frame Steel with just about anything that might jail him. They don’t succeed and as we conclude the devious Hill is winning a huge amount of horse race betting money while a sexy and opportunistic Crystal attempts to seduce him as a criminal collaborator.
There are interesting theatrical, musical and political diversions – and the Iraqi Icicle is a rather attractive white rose that Hill uses to try and seduce the sexy but elusive Crystal.
There’s good dark humour throughout – and I particularly liked the reference to a subsequently defrocked nun at Hill’s school who claimed that her occasionally recalcitrant pupil was in fact a John Lennon lovechild!
BUY Iraqi Icicle NOW http://btfy.me/cfbtw9
Thanks Kathy for your guest review – Bernie
A good Irish name like Kathy Hennessy deserves a song such as this:
And here is a bonus, one more in keeping with the tone of Iraqi Icicle