“My father had a rawhide whip which his father had brought from Africa. He told us that it was a 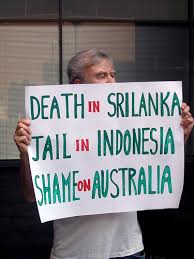 symbol of man’s inhumanity to man. As young children even before we really knew what the words meant, we knew that this whip was a thing of dread.” — Pamela Curr in ‘American Torture, Aussie Style‘

You would think that a country like Indonesia that had thrown off the shackles of the harshest colonial master, the Dutch, would have more sympathy for others (the Tamils) yet to achieve independence. You probably could not expect the same of Australia, still under the yoke of dependence, formerly of the British and now the Americans.

Yet governments of both countries seemed to have learnt little from their own colonial experience.

On Australia’s invasion day (26 January 2010) Indonesian police detained two Australian and one Canadian refugee rights advocates.
Subsequently Indonesian Police and the Jakarta Post have published absurd allegations that three refugee advocates are human traffickers when all they have done is to visit NGO reps and refugees while on a brief stay in Indonesia.
The activists said the charges were changed when it became clear that Ms Nathan had been mistakenly identified as a notorious people smuggler of the same name.
”Initially I was associated with ‘Nathan’, a people smuggler,” Ms Nathan said. ”Later, they claimed we were in a restricted area near the boat, which is completely untrue.”
Since then all three of the refugee advocates were deported from Indonesia and grey listed for six months (i.e. are unable to return for that period).

National Police chief detective Comr. Gen. Ito Sumardi made the unfounded and unsubstantiated allegation that “We have preliminary evidence they were involved in human trafficking activities,” Ito told The Jakarta Post.

The only questions raised by Indonesian officials was violation of restrictions placed on the visitors visa that the women were travelling on. In interviews held with the women police alleged a breach of visa restrictions which, as any traveller would know, are often based on arbitrary and ad hoc judgement by local officials.

The report from the Jakarta Post did not correctly identify the three women concerned and attempted to misrepresent their aims and those of the organisations for which they work.

This is sensational style of  journalism is only too common in ther mainstyream press. The Jakarta Post could have discovered the facts by ringing Ms Nathan or Ms Curr.

One of the women, Pamela Curr, is the Campaign Coordinator Asylum Seeker Resource Centre (ASRC) and has visited other refugee detention centres on Christmas Island, off the coast of Italy and in Britain. Ms Curr has not encountered threats like this before certrainly not the trifecta of questioning, confiscation of her passport and deportation that she received at the hands of Indonesian officials, clearly sending a message to Canberra.

Of course, Pamela Curr is not the first to be threatened, late in 2009 refugee activists received similar threats in Indonesia. No doubt Australian officials play a role in this to protect the Australian government.


Ms Curr went to Indonesia on a visitor’s visa on Wednesday 20 January 2010 to see first-hand human rights abuses in Indonesian detention centres and to visit the refugees at Merak. At one point Pamela Curr managed to scribble the following report:

“Went to Jakarta detention centre today to see 9 men in one cell and 5 in another. Just a few square metres , unpainted walls with desperate messages written in Arabic, Farsi, Tamil and other laguages of desperation by those incarcerated. Grubby old eiderdowns line the floor and there they sleep at night lined up like sardines. No amusements, no space , no air-one tiny window. Locked in for months.”

And so Indonesian authorities detained her twice, questioning her the status of her visa – it was meant for tourists but not to visit people concerning the human rights situation there.

Pamela Curr was clearly targeted by Indonesian authorities because of her record for supporting refugees held in detention in Australia by both Howard and Rudd governments. In this case Ms Curr was defending the rights of 240 refugees at Merak, Indonesia that the current Australian government will not permit into the country.

Mahendra, a local labour activist in Indonesia, is reported in the Jakarta Post article as refuting the claims made by Indonesian police.

Mahendra said the foreign activists were detained at Indah Kiat Port near the boat where the Australia-bound Tamil boat people were being held by Indonesian authorities.

The Labour activist  said that “the women had come to Indonesia to monitor how Indonesia has handled the 200 or so Sri Lankan boat people stranded in Merak for three months on a boat designed to comfortably accommodate 50 people.”

Ms Nathan said officials from Indonesia’s department of foreign affairs told her they did not want to warehouse Australia’s refugees and are frustrated that the government hadn’t taken responsibility.

“I think Indonesia is trying to give a message to the Australian government by harassing Australian citizens,” she said.

It seems that all the Australian and Indonesian governments, media and business community want is to foster tourism. They are disinterested in human rights when they refuse to accept their responsbilities to genuine refugees fleeing from countries that are the victim of colonial wars of oppression by western governments.

I stress that these are my own views written in response to an attack upon the three women mentioned in the article in the Jakarta Post titled: ‘Australians, Canadian held on human trafficking allegations’

It is my view that Rudd (Australia’s current Prime Minister) has only two choices over the refugee issue:

1) He can take the Howard (previous PM) option of refusing entry to refugees; or,

2) He lets all the boat people settle here in Australia.

This will mean that he must have the political will to cop the flack that will come from all the racist and nationalist groups.

Personally, I am for the latter option.

There is no middle road for the Australian government on refugee policy, lives are at stake.

14 thoughts on “Tourism yes, but no human rights”