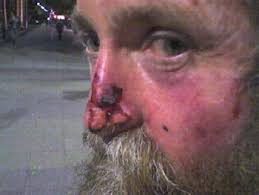 For those of you with a long memory, on Sept 30th 2005 I had my face ground into a concrete floor by police for merely attending a public meeting, a debate between my local member, Peter Dutton and civil liberties lawyer Terry O’Gorman.

Over two and a half years later I received a final letter from the Crime and Misconduct Commission (CMC) telling me that there was no evidence that police did anything wrong in turning my face into bloody mess, and that they had “acted in good faith” in arresting me. (Letter attached)

Now after more than 2 ½ years of wondering what was going on with the so called ”investigation” into my complaint, I have come to realise the CMC must be a very scientific body and were using the “double blind method” of investigation.

You see, the CMC finally informed me for the first time that my complaint really hinged on the magistrate hearing the police charges against me. They were waiting for Magistrate Kerry McGuiness to make a statement condemning the police for assaulting me etc. Now of course, neither I nor the magistrate Kerry McGuiness knew that this was the experiment the CMC was carrying out (the double blind aspect). In fact Ms MCGuiness was probably unaware that my CMC complaint even existed! But at last the CMC informed me that this was what they were relying on to come to their very scientific conclusion as to whether I had been viciously assaulted by police without reason, as I claimed.

In my naivety, I thought someone would investigate my complaint by doing an interview with me and the numerous witnesses who saw me being dragged out of the public meeting for no reason. I thought they might want to talk to the 3 people who were prevented from entering the room in which I was being assaulted. When the “investigating” police officer (the CMC passed my complaint on to the police to investigate themselves), Sergeant Hahne, finally rang me 14 months after the event to tell me he was investigating the incident, I asked him when he would be interviewing me. He replied that it would not be necessary.

Now of course, if the magistrate or I had known the CMC was depending on her to investigate and rule on my complaint, then either of us may have allowed our personal prejudices to influence the matter. For instance I may have asked her to make an adverse comment against the police. Mind you she did say in her summing up that the evidence of my 9 witnesses (including numerous lawyers and former attorney general Michael Lavarche) was perfectly credible. And given that their evidence totally contradicted the evidence of police and security guards, one can only assume that the latter lied. Of course Magistrate McGuiness did not say directly that the police lied in her summing up and the CMC could not dare deduce this themselves given that they had appointed MS MsGuiness main investigator (unbeknownst to herself). So the CMC ruled that the police “acted in good faith” in arresting me, despite MS McGuiness clear statement that I had done absolutely nothing wrong!

So there we have it. The CMC will never let a little blood, cuts, bruises and emotions get in the way of a simple scientific investigation! Many thanks to the Queensland justice system. If it wasn’t for real I am sure I would have had quite a few laughs.

The letter from the CMC follows:

From: OFFICE OF THE Assistant Commissioner Misconduct 22 May 2008

I refer to your letter dated 30 April 2008 raising concerns about lack of response to your complaint by both the Queensland Police Service (QPS) and the Crime and Misconduct Commission (CMC) over the past thirteen months.

Your second letter dated 30 March 2007 (which was attached to your aforementioned letter) referred to correspondence you received from QPS dated 30 September 2005 and 13 March 2007 and mentions that you were contacted by a Sergeant Hahne who advised that he was investigating your complaint. I have contacted the QPS and asked them to advise you the result of their inquiries.

Magistrate McGinness found that the prosecution had failed to satisfy the elements of the offence of Breach of the Peace beyond a reasonable doubt, and therefore dismissed the charge against you. Having considered the evidence, the Magistrate held that your actions did not overtly display an intention to breach the peace. As a result of this ruling, the subsequent charge of obstruct was also dismissed.

You raised a number of issues in court including the discrepancy between what you and your witnesses alleged and what the police and security guards stated. After hearing the evidence, the Magistrate did not make any adverse comment against the police.

During your defence you raised the issue of use of force however both the police and security guards stated that any force used was in direct response to your resistance and lack of compliance. The police acted in good faith at the time of your arrest because they reasonably believed that you had committed an offence.

Your assertion that the police officers and security guards lied in court was based on similarities in the wording of statements and other documents. These issues were well canvassed by you at your trial. Again, the evidence of all persons involved was heard on oath and no adverse comment was made by the Magistrate.

You also raised the fact that you considered that Peter Dutton’s assistant Catherine Stevenson should be interviewed as she was not called as a prosecution witness. I note you were able to call witnesses at your trial.

The QPS considered that the preliminary inquiries conducted by them had established outcomes which were unlikely to change with a full investigation and the CMC agreed.

Whilst I appreciate that this is an unsatisfactory outcome as far as you are concerned, it is considered that it would not be productive to take any further action in the matter.

Leave a Reply to "Brendan, it's a verbal, pure and simple" ... Cancel reply