Shoot and Poke at the Olympics 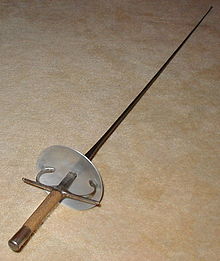 A foil used in the sport of poking-holes-in-people
Italy was also successful in the team shooting-arrows-at-things. Michele Frangilli, Marco Galiazzo and Mauro Nespoli hugged and raised their hands in celebration after the final arrow from Frangilli beat the Americans 219-218 at Lord’s Cricket Ground. Frangilli shot the last arrow of the final for the Italians to win.
Not for profit broadcaster NPR proved it could mix it with all for profit jingoists such as Fox in Olympic coverage with this headline.
Team USA Wins First Medals Of London 2012 Games
Of course, that is ITS first medals of the games not THE first. This misleading banner will not win the jingo gold but it put NPR on the early leader board.
The Australian team took the gold medal in the women’s 4X100m freestyle relay. NPR did not list the Aussie team or the Dutch who came second.  It did list the U.S. team which came third.
We need to play the Aussie National 2012 Games Anthem. This should not be confused with Advance Australia Fair.
The Aussies were Alicia Coutts, Cate Campbell, Brittany Elmslie and Melanie Schlanger with Libby Trickett, Emily Seebohm and Yolane Kukla also winning gold after they swam in the heats.
China’s Yang Sun set an Olympic record in winning the 400m freestyle and Shiwen Ye won the 400m individual medley. English, American and Australian media are inverting the names to have, for example, Ye Shiwen winning gold, despite their accepted names being readily available on the Games website. As a journalist, I am no expert on the world’s nomenclature, buy would you noi go with the official Games website and blame them if it is wrong? WTF, they are only Chinese.
Alexander Vinokourov of Kazakhstan won the men’s cycling road race, with the favourite Mark Cavendish of the UK well beaten.

Alex puts a spoke in the UK wheel
The 38-year-old Vinokourov had a wonderful if unexpected triumph in his last year of racing. He survived a bad crash in last year’s Tour de France, breaking and broke his right femur.  The best he could do at this year’s your was a third in one stage.
Vinokourov began cycling in 1984 as an 11 year-old, competing within the former Soviet Union. He turned professional there in 1998.
Well done, that man on the bike.
Bernie Dowling July 29, 2012

Does anyone do the viz anymore?

Posted on July 13, 2012 by Workers BushTelegraph | Leave a comment
BERNIE’S Best Bet – our fun Twitter tipping service – selects Dash for Viz at lovely Flemington racetrack in Melbourne today.
Dash for Viz is a a 5-year-old gelding by Dash for Cash out of Miss Academic.
The horse is splendidly named, as Dash for Viz  meets the sublime naming criterion of reflecting the monikers of sire and dam.

Viz dashes
Dash for Viz is by the mare Miss Academic and the name reminds me of my days in halls of higher learning.
Academics would dash towards a Latin phrase or word when an English equivalent just would not do. Latin abbreviations were gold.
Entering university, I had barely come to terms with Agatha Christie’s pesky Belgian detective Hercule Poirot and his annoying habit of peppering his speech with French mots. Incroyable!
Reading academic texts, I now had to grapple with a new set of odd expressions, viz words such as viz.
The word crept into the English language in the 16th century.
Viz is the abbreviation of the Latin word videlicit, which means ”namely’’.
The British hoi-poloi long ago punted viz from their everyday lingo. This was as good a reason as any for the academics to hang on to it as a mark of respect for their esoteric knowledge.
You may recall some of the other favourite Latin shorts: ibid, op cit, et al.
The academics when citing some of their fellow travellers would list authors in the fashion of Dot Kansas, Red Ragger et al.
Et al stood for “and others”. I always wondered if this was done to save space or to tell the reader the als were not of any importance. I would have been offended if I was an al.
Contemporary uni students should be able to tell us whether academics do viz anymore. If the academics have ditched it, we commoners should consider reclaiming it.
‘I am having lunch with the girls today, viz Trudy, Judy, Lucy and Pippa.’
Or ‘I’m having lunch with the girls today, viz smoked salmon and mango jus.’
There is nothing wrong with a dash for viz, as long as we do not all do it at once.
Here is our celebratory song to complement the name Miss Academic
SCHOOL SONG

Posted on May 3, 2012 by Workers BushTelegraph | Leave a comment

REMIND me not to bet on anything with fewer than four legs.
Aussie bookmaker  Tom Waterhouse was betting $1.90 Edvard Munch’s pastel painting The Scream would fetch more than $106.5M at an auction at Sotheby’s auction in New York.
My considered opinion was it would go for a mere pittance, less than, $80M. I was way off.
The Scream went for chump change under $120M.

The winning bid was taken by a Sotheby’s executive, and the bidder was not identified.
One of four versions by  Norwegian artist Munch, but the only one in private hands, The Scream easily topped the previous auction record held by Picasso’s Nude, green leaves and bust, which went for a piddling $106.5 million at Christie’s two years ago.
It is reported the sales room at Sotheby’s erupted in applause and cheering when the hammer came down. A few titters of laughter came from those who had read my estimation had paid 50% too much. I believe the laughter was directed at me rather than the buyer.
I could go on about some people having too much money and I will for a bit. Two resolute bidders drew away from the original field of seven to drive the price up by telephone.
Overall, the Sotheby fetched a record $330 million with Picasso’s Femme assise dans un fauteuil, selling  for $29.2M; Miro’s Tete humaine taking $14.86M out of someone’s purse and Dali’s  Printemps necrophilique, gathering  $16.3M in the dead of spring.
Talking of the dead, I made my money today on the annual Grand National Steeplechase at Warnambool, Victoria, here in Australia.
I say dead as the music for the unofficial Aussie national anthem Waltzing Matilda was supposedly the modification of a tune Christina Macpherson heard at this race meeting in 1894. I say dead also in remembrance of the horses and jockeys who have lost their lives during the atavistic sport of jumps racing.
I support the abolition of jumps racing while I will bet on them as long as they continue. You might call that horsey hypocrisy and it would be a good call. As I mentioned in my previous column, we Aussies will bet on two flies crawling up a wall.
Great Britain is the thorn in the side of a world-wide ban on jumps racing. Racetracks there have total programs with jumps racing. Many expensive racehorses run on both the flat and over jumps. The Grand National Steeplechase is an institution.
Banning jumps racehorses would create more reaction than recent attempts to stop the barbaric fox hunting. Oscar Wilde was awake to the essence of that sport  more than a century ago. He called it “the unspeakable in pursuit of the edible”.
Without presuming to improve in Wilde, he could have said the “ineffable in pursuit”. The prefix “in’’  can convey emphasis instead of negativity. Extreme ‘’effers” support fox hunting and jumps racing.
For more of my extreme pontifications see 7 Shouts at Google eBooks or  Amazon. 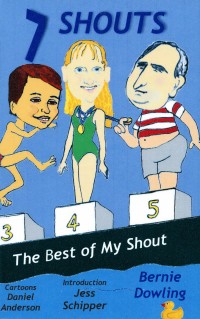 An apostrophe a semicolon and a hyphen walk into a bar

Posted on March 19, 2012 by Workers BushTelegraph | Leave a comment
STAND-UP comedian Lenny Bruce would read transcripts of his obscenity trials towards the end of his career. It was embarrassing rather than funny. Literary jokes are thin in the air.
“J. K. Rowling is writing a contemporary adult novel; what’s that all about?” is not in the comedic handbook as the intro to a gig. Yet, with so many funny books out there, the world of literature should be a fertile field of frivolity.
Let us see if we can create a few immortal literary jokes – even a few timely ones will do.
This one is supposedly true though I have embellished it to a joke format. American artist James Whistler is holding a dinner party in London in honour of his mother Anna. Among the guests are French writer Guy du Maupassant and Irishman Oscar Wilde. Du Maupassant delivers a bon mot before dessert. “I wish I said that,’’ Oscar Wilde says. Whistler replies, “You will Oscar. You will.”
A very old man knocks on heaven’s doors. From the other side St Peter growls, “We’re closed; come back tomorrow.’’ The old man wearily protests he has been looking everywhere for his son. St Peter asks what is his son’s name. The old man replies, “I don’t know what name he goes by now but he has nails in his hands and his feet. The gates open wide as St Peter says, “Jesus, get out here, someone to see you.” Jesus rushes out to embrace the old man. “Father,” he says.  The old man warmly returns the embrace. “Pinocchio,” he says.

An apostrophe, a semicolon and a hyphen walk into a bar. That is all I have.
How does this joke end? You tell me. Send me the ending or a literary joke you know. Respond here or email bentbananabooks@gmail.comYour joke will be available for publication, so please supply a name of some sort.
Buy 7 Shouts HERE.