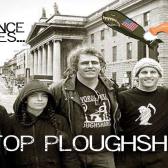 On Monday July 25th. we gathered in Dublin/ Ireland to celebrate the 10th. anniversary of the acquittal of the
Pitstop Ploughshares on charges of $U.S. 2.5 million criminal damage of a U.S. Navy War Plane

at Shannon Airport en route to the 2003 invasion of Iraq.

We were joined by Damien Moran, Deirdre Clancy and Ciaron O’Reilly of the Pitstops, Kathy Kelly an

eyewitness to both the 1991 Gulf Massacre and 2003 Shock and Awe U.S. invasion of Iraq. Kathy had also initiated the sanctions

busting Voices in the Wilderness movement in the 1990’s. Artist Seamus Nolan displayed the Pitstop hammers,
playwright Donal O’Kelly read from his new play dealing with military whistleblowers, the ” Chelsea Manning Support
Band” comprising of Joe Black, Paul O’Toole, Robbie Synnot and Roj Whelan performed. Harry Browne author of the book
“Hammered by the Irish” and members of the Pitsop legal team were also in attendance.

The theme of the event was “The Resistance Continues” which was enhanced by the presence and speeches of
Dave Donnelan and Colm Roddy presently awaiting trial for a recent trespass action at Shannon Airport. Calls for
solidarity with Julian Assange and Chelsea Manning were also made. Those who gathered included folks from Afri,
Veterans for Peace Ireland, Young Christian Workers and many who had accompanied the Pitstops through their

Posted on July 30, 2016 by Workers BushTelegraph Leave a comment