[PN: This article slipped through the reactionary filter of the
Australian’s editorial team.]

we react to issues surrounding Queensland MP Billy Gordon will demonstrate our collective maturity. As concerning as some of the allegations against him are, there is more at stake than a political career or whether the Labor Party can maintain its hold on majority government.

of the facts deserve clarification. In a 13-page letter, a number of diverse allegations by Gordon’s former spouse were ventilated in the media. A copy was sent to the Speaker of the parliament. He sensibly obtained written advice from the clerk of the parliament.

advice is part of the public record and unexceptionable. No one has doubted its correctness. The clerk explained none of the matters raised in the letter required that Gordon cease as a member of the parliament.

some in the ALP, for predictable political reasons, distanced themselves from Gordon. For them, his resignation from the party has not been enough. While these matters remain as untested allegations, those quick to stand in reflected glory when he and Leeanne Enoch were elected now should not be so quick to cut him adrift.

will take courage and resilience on Gordon’s part, but it is important for the community that he stays put, for now. The moral and political righteousness fomented in local media is clouded with hypocrisy.

is a symbol of hope for many, indigenous and non-indigenous. His rise through the ALP made that party look better, and his election makes us all look better. He makes visible and audible the plight of his mob in a national conversation that has lacked momentum since Mabo. To hound him out of parliament would be a grave mistake.

any juvenile criminal conviction exists, it does not disqualify him from sitting in parliament. Nor was he obliged to disclose it to anyone as part of the election process. Any piety to the contrary is misplaced. That some members of the community, including his former spouse and those sponsoring her, have published juvenile convictions and continue to use them in their campaign for him to leave parliament is shameful.

is also unlawful. A law places restrictions on publishing juvenile convictions. Moreover, such is our belief in redemption and rehabilitation that, under another law, adult criminal convictions are treated as expunged after the passage of time. People should be given the opportunity to redeem and reform. The whole community benefits from rehabilitation. These attacks on Gordon show a latent disrespect for the law and a malicious hypocrisy.

does our argument in Indonesia about redemption for the rehabilitated young men on death row, that many of our parliamentarians have rightly and powerfully put, compare with how Gordon’s path to election is being viewed? Do we have a different place for “blackfellas”?

Premier’s position has been lauded in some circles. But wouldn’t a more considered view be to take a sophisticated position on redemption, in particular for someone with Gordon’s complex background? Inequality is such that the indigenous community has had a disproportionate interaction with the criminal justice system. Yet many have gone on to greatly enhance the cultural integrity of this country.

mere allegation Gordon wears the public disgrace of being “a wife-basher”. He has not been afforded any natural justice. The conduct is alleged to have occurred more than six years ago. As the clerk explained, there is no basis on which any domestic violence protection order could be made absent evidence of a current risk. No complaint has been made to police.

also know the correspondence containing the allegations was at least co-ordinated by a Liberal National Party politician. There has been no finding against Gordon by any court. If this establishes how allegations of domestic violence can be used, it diminishes the entire issue. It hardly bespeaks best practice, other than in the art of political assassination. It also means his former spouse’s rights have been diminished in the pursuit of political expediency. The integrity of her allegations has been irreversibly tainted.

is not leaving parliament. Nor should he. He is willing to respond, in the appropriate forums, to all and any of the allegations that have been made. If we do not allow process to be properly followed, it demeans the political and criminal justice systems.

Andrew Boe is a barrister retained to act for Billy Gordon. 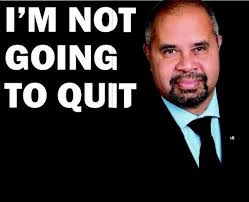