Innocent: the rendition of David Hicks

MANY letter writers have said David Hicks got off on a technicality. His appeal was allowed because what he did was not a crime when he did it. I have one question for those who attack Opposition Leader Bill Shorten for describing Hicks’ conviction, imprisonment and claimed torture as an injustice. Are you in favour of the rule of law or would you prefer to be governed by political decree?

THE Australian Government wished to confiscate all monies earnt by David Hicks in writing his diary about his detention at Guantanamo Bay in Cuba.

I have read Hicks’ book Guantanamo: My Journey. It tells the story of how the US government falsely imprisoned and tortured Hicks and others.

Hicks was a working class lad, politically uneducated, and idealistic about the wrongs of the war on terror. Hicks tried to join the Australian army. But he was rejected because of his low education level. Hicks ended up in Japan, training horses. While in Japan Hicks saw a video about what had been happening in Kosova and was encouraged to travel the world by an Israeli friend. Hicks explains in his book how he joined up with the Kosova Liberation Army (KLA) and about its eventual takeover by NATO forces. Hicks returned to Adelaide and happened to visit a local mosque which had lots of international affairs magazines —  Hicks became interested in Islam because he wanted to travel to the Middle East.

However Hicks went on a holiday to Pakistan, Afghanistan and Kashmir but ended up in in back Afghanistan because he had to go back to retrieve his passport which he had left behind. Hicks could not speak any of the languages of the region and not surprisingly lost his way. He didn’t realise the danger of travelling to Afghanistan, that the US had switched sides to local warlords (Northern Alliance) against the Taliban whom they had previously supported.

Hicks did not kill or threaten to kill anyone while in Afghanistan.

The world media (especially the Murdoch Press) goes to great lengths to make Hicks look like an Al Qaeda terrorist by repeatedly publishing this edited photo of Hicks holding a rocket launcher. 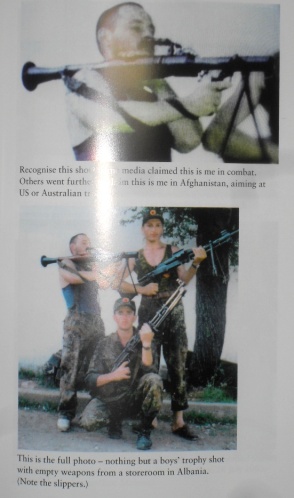 Note that his mates are wearing slippers and playing with unloaded guns as part of a joke. Hicks did not see action in Afghanistan.  Hicks was captured by Northern Alliance warlords and sold to the Americans for $5,000 who then sent Hicks to Guantanamo Bay (this is called rendition).

No one deserves to be tortured – Hicks’ autobiography gives an insight into how a naive Australian was drawn into a world of intrigue and ultimately terror.

In 2009, President Obama promised that Guantanamo would be shut down, it remains open to this day.

The video below shows he testimony of Brandon Neely who was a US military policeman  at Guantanamo bay in Cuba. Neely was the first person to receive David Hicks after he arrived at Camp X-Ray. Neely reveals the torture of David Hicks, the lies told by US military officials about Hicks and the complicity of Australian and US government in his torture.

Posted on February 25, 2015 by Workers BushTelegraph Leave a comment