Publisher’s note: It is 30 years since the Queensland government’s introduction of contract labour in the power industry and subsequent sellout of 1002 SEQEB workers sacked by Bjelke-Petersen.

In 1985 labor leaders such as Nev Warburton (ALP Opposition leader), Simon Crean (ACTU President), Ray Dempsey (Secretary of the Trades & Labour Council), Neal Kane (ETU secretary) and Tom Barton (TLC) refused to support the men and their families and called off strike action at crucial times during the dispute.

From the account below by ‘Word from Struggle Street‘ this era’s Labor leaders in government do not appear to have learnt the lesson of rationalising and cutting back essential services. For years maintenance of the power grid was placed on the back burner. Labor in power are making workers suffer for the failure of the mega-rich companies and their boardrooms ripping out profits as the economy stagnates. 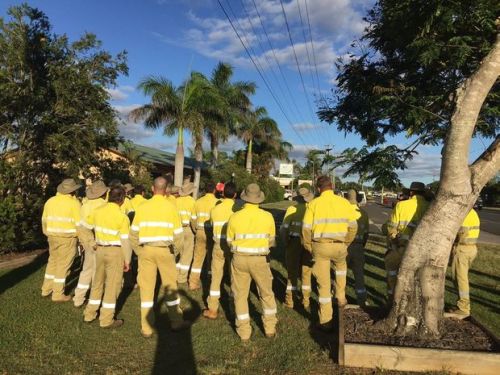 On the 20th January workers at Ergon Bundaberg Depot walked off their jobs in protest at proposed plans to cut positions and increase outsourcing. This followed a similar action in Atherton the previous Friday. Whilst this industrial action has received little news coverage it is of incredible importance. It is the articulation of a group of workers’ collective self-interest in a way that actually points to the deep flaws in the ALP state government’s attempt to manage the challenge of funding social reproduction and honouring the state’s debts (in the context of the end of the mining boom which is a symptom of the Global Recession). What this struggle shows us is that under the layers of mystification debt is ultimately about class struggles:  debt hinges on the struggle between the ability of capital to secure the future of its profits via the imposition of work and discipline today and our collective ability to refuse it and assert our dignity and desires.

The local paper the Bundaberg NewsMail reported the following:

Electricians and linesmen from the Bundaberg depot walked off the job Wednesday morning in response to the company’s decision to outsource more work at the expense of permanent front line positions.

“It’s getting dangerous. We’ve got power poles and cross arms rotting through and failing thanks to extended inspection cycles, as well as important network hardware failing right across the state,” he said.

“Instead of dealing with the problem through a well-planned maintenance program supported by adequate internal staffing, Ergon’s answer seems to be to slow the flow of work down even further and use that as justification to close out front line jobs.  They are proposing to cut 13 field based jobs in the Fraser Burnett region.

“These are frontline jobs that should be employed locally to ensure there is sufficient maintenance and local resources when we get hit with major storm events.”

So what’s going on? As a general rule all firms (state and private) that exist in a capitalist society are driven by material and ideological forces to attempt to maximise ‘efficiency’: which means to attempt to constantly get more out of workers whilst reducing numbers, pay and conditions. As a general rule. However beyond this we can clearly see a link between Ergon’s actions and the ALP state government’s Debt Action Plan.

Sovereign Debt, that is the debt of governments, is a problem for all governments. As I show here in the context of the end of the mining boom governments in Australia are struggling to do contradictory things: they need to provide a certain level of social services to help reproduce capitalist society, the need to spend to stimulate capital accumulation but they need to do so in a way that minimises the impact on capital in the form of taxation and honours the state’s debt so it can function as a profitable investment for creditors and in the pricing of financial assets overall. This isn’t an illusion in the minds of politicians and bureaucrats but a reality all governments are caught in. To be 100% clear: rising sovereign debts are a product of global dynamics as states struggle to pay for the level of social services that capitalist economies require, stimulate failing economies and maintain levels of taxation that are attractive to capital in the context of a global recession and the possibility of another meltdown (cf. Streek 2014). Indeed state, business and household debts continue to rise world-wide (McKinsey Global Institute 2015). The problem is systemic. Let us never forget that all debts function as assets for someone else: thus all attempts governments make to pay their debts are attempts to make profits for their creditors.

The current Palaszczuk ALP government won the 2015 election, arguably, due to the rejection by many voters of the LNP’s Stronger Choices Package. The latter planned to reduce debt and fund stimulative investment via the ‘leasing’ (de facto privatisation) of energy generating assets. This plan was in concordance with the plans of the then Abbot-Hockey Federal government. It followed on from the Newman government’s cuts to the public service and to the funding for many social services (thus pushing more of the costs and labour of social reproduction onto the wage and into the home – thus onto mainly women’s shoulders).

The Palaszczuk ALP government’s strategy has had three prongs to it. Firstly they talked down the size and challenge posed by the state’s debt; since the Newman LNP government had over-egged the numbers this gained some currency.  The second line of strategy was ‘to only funding long service leave on an emergent basis, rather than setting aside financial assets; and temporary suspension of investment of defined benefit employer contributions, whilst maintaining a fully–funded status.’ The third line of strategy was to hand debt from the books of the state government onto those of state owned companies (Ergon Energy, Energex and Powerlink) – and then encourage a rationalisation of these companies to pay down debt (2015,12).  The 2015-16 Budget transferred $ 4.1 Billion dollars onto the books of these companies whilst the MYEFR added another $1 (Billion). These government-owned corporations would now pay out a dividend of 100% of the net after tax profit.  Tied to this was the plan to increase the efficiency of energy companies – including through amalgamations.

This placed the government into surplus, and from here it is hoped, that continual growth – especially from LNG exports – would lead to a long term decline in the amount of the debt. The growth projections that underscore all this are ridiculous. Whilst Queensland GSP (basically GDP for states) grew only by 0.5% in the financial year 2014-15 the state government is still projecting that it was grown by 4% in 2015-16 (2015,2). This is nonsense. Qld is the 6th worst performing state economy in Australia (Stephens 2016).  The IMF has downgraded global growth projections again and the falling growth rates in China and the related global plunges in commodity prices directly damage Australian mineral resource exports. Indeed many LNG projects are looking less and less viable. Given that revenues will probably be much much lower than projected as economic growth will be much much lower and thus debt, potentially, will be much much higher.  Indeed at best all the Palaszczuk ALP government has been able to do is defer or stall the crushing power of debt.  It will return with vengeance and this temporary surplus will evaporate (probably).

Shifting the debt onto government owned corporations and directing their profits towards servicing debt is at least one of the factors driving the outsourcing and drop in maintenance standards that the Ergon workers are objecting too.  In short the ALP governments plan has meant an attempt to manage debt through the increased exploitation of workers employed by the companies and a diminution in the quality of services.  Debt is always money lent today for profit tomorrow and thus is contingent on the ability to impose work.  Debt is always about the imposition of discipline. If the Ergon workers successful resist these attacks they will make the company’s and thus the state’s abilities to honour its debts increasingly precarious. And let us never forget that state debt is some other investor’s asset. Thus the collective resistance of Ergon workers is a threat to these profits and capital accumulation more broadly.

So far the union has appealed to the State government to intervene to save jobs. This is not surprising as asking for government intervention is an increasingly common strategy of unions whose members are facing job losses and the organisational links between union leadership and the ALP entwine the two together. However such a strategy misses the point. Whilst the management of Ergon may well be a pack of bastards these attacks on working conditions and qualities of services arise from the failing strategy of the ALP government to address the symptoms of a global crisis of capitalism. As difficult as it seems it is the latter we need to overcome – which means resisting and opposing the former.