Here are some key points (some missed, some not) in the article by the ABC (below) :

Photo: Documents reveal that a land acquisition application was prepared in a bid to help Adani. (ABC News)

Queensland’s coordinator-general is proposing to extinguish native title over a leasehold property held by the Indian mining giant Adani, which would allow the company to begin building infrastructure for its $16 billion Carmichael coal mine.

Adani bought the pastoral lease for Moray Downs in 2012. But the company now wants part of the property converted to freehold so it can build an airport, power station and accommodation for its mine in central Queensland.

Moray Downs is at the northern end of the mine site and the company cannot proceed with construction until it gains freehold title and has any native title rights over the area extinguished.

The Wangan and Jagalingou Indigenous people have claimed native title over an area that includes Moray Downs, but the Federal Court is still to determine whether to uphold that claim. 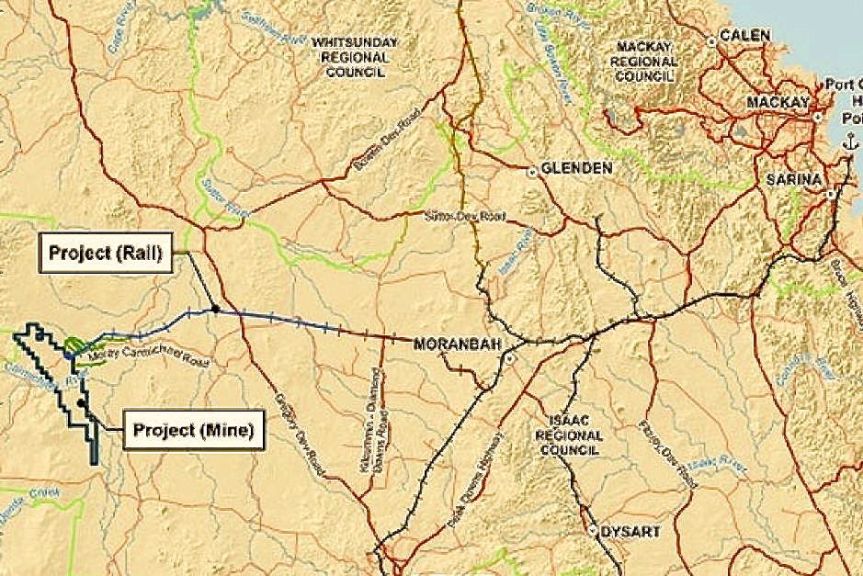 Adani has been negotiating with the Wangan and Jagalingou people for three years over a proposed Indigenous Land Use Agreement in an effort to have native title over Moray Downs removed, but no agreement has been reached.

A document from the Queensland coordinator-general’s office, obtained by the ABC, reveals that a land acquisition application has been prepared to take part of the Moray Downs property in a bid to help Adani.

“The Moray Downs Land acquisition includes the take of native title rights and interests of the Wangan and Jagalingou People to allow for the leasehold land to be converted to freehold.

“No objection to the acquisition of the native title rights and interests was received.

“When the acquisition of land at Moray Downs was proposed in July 2015, the approach was for the coordinator-general to acquire the land, agree an interim licence with Adani, then within a period of around two months, have the freehold land transferred to Adani.”

If the acquisition goes ahead, native title claimants would be free to claim compensation.

The Queensland coordinator-general has the authority to plan and deliver large-scale infrastructure projects, and has the power under the State Development and Public Works Organisation Act to compulsorily acquire land and native title rights.

The coordinator-general has extinguished native title in the past, including for the Townsville State Development Area and the Tarong Power station.

If the proposal goes ahead, it is believed that it would be the first time native title has been extinguished against the wishes of traditional owners for the sake of a private sector infrastructure project.

“It’s only ever used by the Government for very large projects for obvious reasons, because it’s a fairly draconian power,” Professor Jonathan Fulcher of the University of Queensland Centre for International Minerals and Energy Law said.

“The controversy here is the exercise of that power without consent, and that is a controversial thing to do, particularly in relation to native title land.”

Adrian Burragubba, from the Wangan and Jagalingou Traditional Owners’ Council, is challenging Adani’s Carmichael mine in the Federal Court.

Last December he received a “notice of intention to resume native title rights and interests” letter from the coordinator-general’s office.

It offered Mr Burragubba, as a registered native title claimant, the right to object to the proposal.

“Unfortunately under the native title regime there are time constraints and we were pushed to the limits,” Mr Burragubba said.

“We’ve said no. We’ll end up with nothing at the end of it. The Government will come and compulsorily take our land.”

The office of the minister for State Development, Natural Resources and Mines, Anthony Lynham, has been contacted for comment.