Unified movement represents a new hope for West Papuans to continue building momentum for their struggle.

In a gathering of West Papuan leaders in Vanuatu last week, different factions of the independence movement united to form a new body called the United Liberation Movement for West Papua (ULMWP).

In kastom ceremonies that included pig-killing and gifts of calico, kava and woven mats, West Papuan leaders embraced each other in reconciliation and unity while the Prime Minister of Vanuatu, church groups and chiefs looked on. The unification meeting was facilitated by the Pacific Council of Churches.

The new organisation unites the three main organisations and several smaller ones who have long struggled for independence. By coming together to present a united front, they hope to re-submit a fresh application for membership of the Melanesian Spearhead Group (MSG) as well as countering Indonesian claims that the West Papuan groups are divided. The divisions have tended to be more about personalities than any real policy differences since all the groups have been pushing for the same thing: independence from Indonesia. But the apparent differences had sown some confusion and gave cover to Fiji and others in the region to say the movement was not united and therefore undeserving of a seat at the MSG so far.

This narrative has been challenged by other leaders in the region such as the Vanuatu Prime Minister Joe Natuman who said that the very fact the West Papuans are a Melanesian people gives them the automatic right to be represented by the MSG.

Following the unification gathering, newly elected spokesperson for the ULMWP Benny Wenda said “We West Papuans are united in one group and one struggle now.” Wenda claimed this was the most important gathering of West Papuan leaders since the struggle began 52 years ago.

The key groups to have united include the Federal Republic of West Papua (NRFPB); National Coalition for Liberation (WPNCL) and National Parliament of West Papua (NPWP), which incorporates the KPNB (National Committee for West Papua). An external secretariat consisting of five elected members from the various groups will now co-ordinate the ULMWP.

Octovianus Mote, a former journalist who has been based in the US for many years, has been elected General Secretary of the ULMWP. Benny Wenda is the spokesperson and the other three elected members are Rex Rumakiek, Leone Tangahma and Jacob Rumbiak. 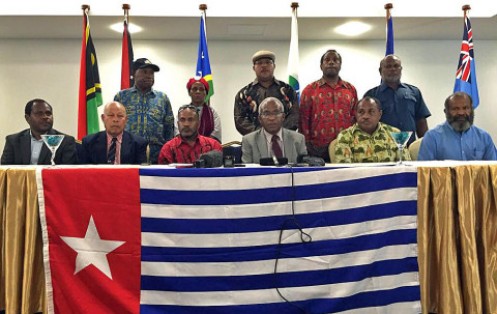 General Secretary Mote said at the close of the unification meeting “I am honoured to be elected and very happy we are now all united. The ULMWP is now the only recognised co-ordinating body to lead the campaign for MSG membership and continue the campaign for independence from Indonesia.”

In a speech outside the Chief’s Nakamal (the hut which serves as a focal point for all the chiefs of Vanuatu), Mote spoke of the urgency of their situation. He quoted economist Dr Jim Elmslie whose demographic projections suggest that Papuans will comprise only 29% of the population by 2020, highlighting the massive transmigration program that continue to bring settlers in from around Indonesia. Indigenous Papuans are already a minority in their own land – and Mote warned that once West Papua is fully “asianised” then PNG will be next.

PNG is already under sustained pressure from Indonesia, witnessed by the last minute blocking of a charter flight organised for 70 delegates, many of whom had travelled for weeks through the jungle of West Papua to reach PNG, from leaving Jackson’s airport in Port Moresby. Peter O’Neill’s PNG government had originally organised and paid for the charter to get delegates to the Vanuatu meeting but appears to have succumbed to Indonesian anger. In the end 5 of the 70 delegates marooned in Port Moresby found commercial flights and got to Port Vila in time for the final day’s signing ceremony, which became known as the Saralana Declaration.

While Indonesia dangles the carrot of “assistance” and supporting Fiji and PNG’s bid for ASEAN membership, other Melanesian nations  are not so easily bought. No-one could accuse Vanuatu or its successive Prime Ministers of bowing to Indonesian pressure – the issue has bi-partisan support there and has become a domestic political issue. Vanuatu’s current Prime Minister Joe Natuman gave full state support for the West Papuan gathering saying he didn’t care if Indonesia cut diplomatic relations with Vanuatu.

West Papuan delegates were moved by Vanuatu’s support and spoke emotionally about ongoing atrocities and repression in their homeland. Even as they united, reports of more killings surfaced this week.

General Secretary Mote told me the next step is for the new movement to re-submit their MSG application for membership between February and March next year, with MSG leaders expected to make a decision when they meet in the Solomon Islands in June 2015.

No doubt some internal tensions will remain, given the tribal diversity of West Papua and its traditionally de-centralised leadership, but the newly unified movement under the ULMWP represents the best chance yet for the Papuans to continue building momentum for their struggle.