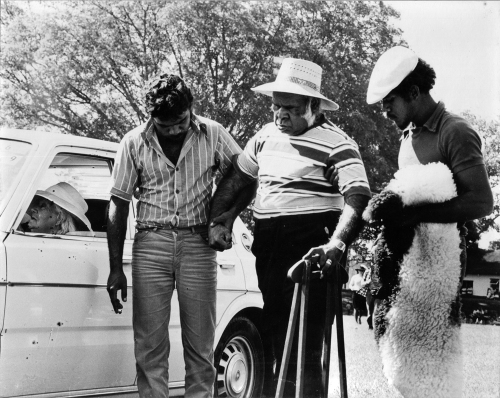 Caption: Pastor Don Brady was part of the core political leadership in the Brisbane Black movement in the 1960s and 1970s. He was a legend in his own time.

Don is of Kuku Yalanji descent and his tribal name is Kuanji.

Originally from Palm Island (where he spent time as a professional tent boxer) he moved to Brisbane in 1962.

A self-confessed former alcoholic, he was known as the “punching parson” because of his ability to handle homeless inebriates frequenting Musgrave Park in South Brisbane.

Don Brady was given a Churchill scholarship in 1968 and he visited and worked with a number of First Nations and other communities in the US. He also visited the urban ghettos of New York at the same time Malcolm X was big in Harlem.

Upon his return, he was a founding member of the Brisbane Tribal Council (which became the National Tribal Council after 1970) which was set up to help Indigenous people establish their own identity and to preserve their culture.

More than five hundred people gathered at Musgrave Park to mourn his passing in 1985. Praising his leadership, Rev. Charles Harris described him as “the Martin Luther King of the Aboriginal race”. His peers hailed him as a civil rights advocate who gave Aboriginal people a sense of pride and taught them to fight for their rights.

Posted on July 17, 2014 by Workers BushTelegraph Leave a comment