Silences in the boom: coal seam gas and neoliberalism

[Editor’s Note: Combined here is an extract from an article published in the Journal of Political Ecology and a talk given by one of the authors, Ack Mercer, at Brisbane Free Uni. The article text below originally contained some references that I have removed. Thnx to brisbane free uni who put on this talk by a group of activists and academics (drew hutton, trevor berrill, sarah lowe & ack mercer) about coal seam gas in Australia and the work of the Lock the Gate campaign. Also the full text with references is at Mercer, de Rijke, and Dressler Coal seam gas, neoliberalizing discourse, and regional Australia Journal of Political Ecology]

In May 2012 an estimated 7,000 Australians participated in a single march against coal seam gas (CSG) extraction in the town of Lismore, located in north eastern New South Wales. Many of the Lismore marchers held signs from the Lock the Gate Alliance (Lock the Gate), a key umbrella group opposed to CSG industry expansion across eastern Australia encouraging and supporting ‘grassroots’ resistance among landholders.

A steady stream of such marches, petitions, conventions, blockades, and direct physical obstruction of CSG industry operation over the last two years has seen unexpected alliances form between, and among, landholders and various civil society groups. This has led some commentators to speculate about the ‘radicalization’ of rural eastern Australia – an area rich in coal and CSG deposits where public opinion and furor is particularly strong. Such unprecedented domestic public engagement with trends in fossil fuel energy production and associated land use issues is important. 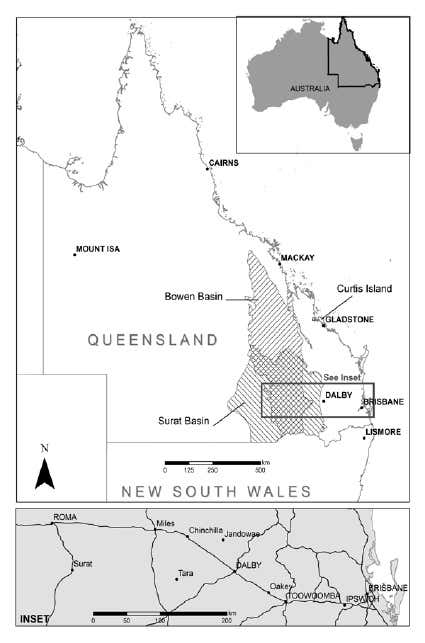 The Surat and Bowen Basins in Queensland. Source: de Rijke 2013

It points to a high stakes contest, interconnected with similar others playing out across the world, as longstanding debates about pollution , worker’s rights, and rights to land  combined with increasing concern about climate change and global scarcities of resources.

What happens in the next ten years with Australia’s planned new fossil fuel exports, particularly Queensland coal, is set to have a substantial impact on the global climate change situation.

In this context alone, it is important to examine the key beliefs at play in domestic debates about Australia’s fossil fuels. These beliefs have important consequences for Australia’s resulting actions regarding exports, which in turn have the capacity to impact investments in and acceptance of different forms of energy production globally.

This article addresses current contests over Australian coal seam gas through an examination of discursive factors that dominate public debate. In particular, the article explores perspectives and language use concerning two themes: what is considered effective regional development, and what is implied about the role of economics in decision making.

Noting the particular relevance of these two themes to resource use struggles, and their interconnectedness with neoliberalizing political economy, we explore the ways perspectives and language concerning these themes might be working to emphasize some kinds of discussions about coal seam gas while obscuring or circumventing others. We do this through an analysis of texts from stakeholders in the state of Queensland throughout 2012, supplemented with more recent observations from the field across Australia’s East Coast….

Coal seam gas in Australia
Coal seam gas, like shale gas, is an ‘unconventional’ gas, the extraction of which is subject to substantial public controversy in Australia. It is sourced from methane deposits that, when compared to conventional deposits in the absence of special stimulation or extraction techniques, retain a much greater proportion of their otherwise available gas. Production of sufficient quantities of CSG for international trade thus may require the relatively new technique of hydraulic fracturing in combination with directional drilling, typically in previously un-mined areas, as easily accessible conventional methane reserves around the world become depleted .

Extraction of CSG is most developed in Queensland. Proponents envisage about 40,000 wells being drilled in the state in the coming decades. Pipelines up to 500 kilometers long are also under construction to transport this gas from dispersed production sites throughout the Surat and Bowen Basins to industrial facilities at Curtis Island near Gladstone where the coal seam gas will be converted into liquefied natural gas (LNG) for export. Huge speculative investment – where what a well will produce is less important than what you can convince people it will produce – and an entanglement with global production networks sets the current CSG boom apart from smaller scale natural gas extraction in Australia in the late 1990s and early 2000s.

… This article uses the phrase neoliberalizing political economy to emphasize neoliberalization as a process or project, involving near global pressures that shape smaller scales in complex and locally variable ways (Peck and Tickell 2002: 395-396; Harvey 2011; Springer, 2012). Political economy includes the material realities associated with this project more than would the term neoliberalism or neoliberalization alone (Fine 2004:213; Harvey 2011:119-139). In this sense, neoliberalizing political economies comprise “patterns of… power” (Gill 1995:4) and structures of governance that are dominated by the “power and influence of the agents of transnational capital”, and ever re/configured to reward those who work within the logic of ‘the market’ (Gill 1995:10).

Key in the perpetuation of this neoliberalization are the particular “regimes of truth” , or the particular “pervasive metalogic[s]” , that are drawn on to make and justify particular policies. These metalogics in turn are maintained and embodied, in local variations across the world, through discourses as well as through actions or practices . Discourses in this sense are particular, although varied, bundles of beliefs, concerns, and language choices that are shared across groups of people and that shape individuals’ production(s) of meaning and their interactions with their world . Thus this article examines apparent underlying discursive factors (beliefs and patterns of language use) to better understand the dynamics of the struggle occurring over unconventional gas in southern Queensland. Read more at  Mercer, de Rijke, and Dressler Coal seam gas, neoliberalizing discourse, and regional Australia Journal of Political Ecology

Posted on May 18, 2014 by Workers BushTelegraph Leave a comment

This entry was posted in Aboriginal Struggle, community, democratic rights. Bookmark the permalink.