We have no power.

Each suburb in Brisbane gets only about one and a half hours power each evening.

Tonight we got 45 minutes because we’re near factories in West End that are mostly shut down.

Joh is trying to take three weeks to do something that Thatcher has spent 10 years trying to achieve (in England). He is trying to destroy the economy of Queensland. First he knocked down the Brigalow, then the Democratic Rights groups and now the union.

There have been 500,000 workers stood down throughout the state. All major industries and most commerce have ground to a halt. The dream of the economist, Milton Friedman, has arrived. The National Party believes that the economy, having been destroyed, will rise up, like a Phoenix from the ashes, into a far more powerful and virulent form of free enterprise. END_OF_DOCUMENT_TOKEN_TO_BE_REPLACED

Posted on July 23, 2009 by Workers BushTelegraph

Posted on July 23, 2009 by Workers BushTelegraph | Leave a comment

Conference to be held Friday 11 December 2009 in Brisbane.

To submit an expression of interest, please follow the instructions in the attached flyer and contact Mr Paul Florens by email paul.florens@deir.qld.gov.au or phone (07) 3225 2633.

Conference papers will be due Friday 30 October 2009.
Please direct any queries to:

Posted on July 21, 2009 by Workers BushTelegraph

Posted on July 17, 2009 by Workers BushTelegraph | Leave a comment

Poetry in Motion IV
Day of solidarity with Cuba

A program of Cuban poetry readings and live music, with food and drinks. Entry by donation.

Posted on July 14, 2009 by Workers BushTelegraph | Leave a comment

Palestinians often live in tents next to their demolished homes.
In Jerusalem, but also in the West Bank, the Golan Heights, and elsewhere, the State of Israel continues its policy of house demolitions. Evictions of Arab families are a common occurrence.
They are taking place under the cover of claims, such as security, the building of the apartheid wall, the expansion of settlements in the West Bank or the creation of national parks. Since 1967 and the beginning of the occupation Israel has attempted to empty the territory of its Arab population as the desire to make Jewish state of Israel a ‘fact on the ground’.
END_OF_DOCUMENT_TOKEN_TO_BE_REPLACED

From 1966, eight or more executives from the AMP, Dalgetys, Hammersons, Hookers, National Mutual and the Bank of NSW met over lunch to share ideas about the issues they faced as owner-managers of commercial properties. In August 1968, thirty-eight representatives of such businesses gathered in Sydney to form a Business Owners and Managers Association (BOMA). The NSW Public Works Department attended from the start because it had the same problems of maintenance and servicing as did the corporates. BOMA’s incorporation a year later advanced a process of self-discovery for one segment among Australia’s large property developers. BOMA had moved from being a club to a company, a sign that its founders meant business. At that stage, they saw themselves establishing a professional body to train people to look after the tall buildings and shopping complexes that had been appearing since 1957. Late in 1996, BOMA re-birthed as the Property Council of Australia. END_OF_DOCUMENT_TOKEN_TO_BE_REPLACED

Posted on July 14, 2009 by Workers BushTelegraph | Leave a comment

The film is called "Friends and Enemies" – by Tom Zubrycki.
A documentary about the SEQEB struggle in 1985 in Qld. 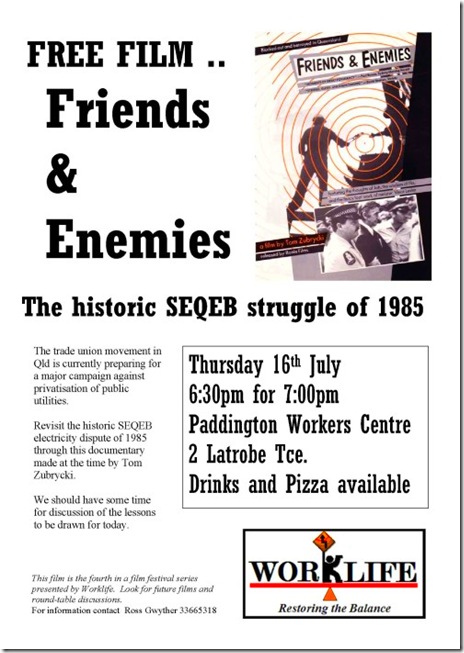