This past Saturday, a van load of pilgrims en route to the Festival of St Brigid in Kildare were stopped by the Irish Special Branch. We were questioned under Section 31 of the Offences Against the State Act and a detective accused me of being a terrorist. The paradigm shifts evident in this event are of concern and worth consideration.I have had dealings with the Special Branch for 30 years now. It’s historically interesting that the original name was the “Special Irish Branch”, I guess when they opened a franchise in Ireland the middle word became redundant. In post WW2 U.S., the FBI went through a period of heavily recruiting “over compensating more patriotic than thou” Irish American diaspora to such an extent – the joke was FBI stood for “Foreign Born Irish”. In the ’60’s along came the Berrigans, the draft board raids and “the Catholic Left” to such an extent that Irish Catholics lost their recently gained status as FBI recruitment fodder flavour of the month and the story goes that recruitment switched to targeting Mormons

In Queensland (Australia) in the ’70’s, we had an enormous Special Branch for the small size of the population. See http://bushtelegrap h.wordpress. com/2006/ 10/28/not- guilty/

They were mostly corrupt Irish Catholics servicing a corrupt Calvinist Premier Bjelke-Petersen. The deal was the cops could run, or get a take on, the drug, brothel, illegal casino action if the cops were willing to be used on the streets to deal with dissent. The politicians took their take from a more elevated trough, in terms of bribes and shares from Japanese & US. transnational corporations devouring the raw materials and carving up the real estate.

During my last year of high school in ’77, all demonstrations were banned in Queensland for the next 3 years. In this period, I got to meet Special Branch as they would photograph me, photograph people talking to me, follow me, beat me up, fit me up, raid my house and detain me.

For me, this harrassment peaked in ’83 following a riot at the local prison. Instead of looking into the inhumane squalid conditions that caused the riot, a meeting of the Special Branch and prison riot squad concluded that an exotic alliance of lefty groups had conspired to call the shots and instruct the lifers to riot. Groups named were a weird collection of hybrids like the “Marxist Leninist Anarchists”, nonexistent entities the “Circle A Gang”, old dependables for a fit up Ananda Marga, the Sparticus and the Brisbane Catholic Worker community. It reminds one of Abbie Hoffman’s response to the Prosecutor during the Chicago 8 Conspiracy Trial (coming to a movie theatre near you real soon http://en.wikipedia .org/wiki/ Chicago_Seven )

Prosecutor “Did you conspire with these seven

others to riot in Chicago?”
Hoffman (looking at his codefendants, many who didn’t like his politics too much) responded
“Conspire? We couldn’t agree on lunch!”

A week after the Special Branch/Riot Squad findings, the state (in order to take

squalid prison conditions off the front page) claimed they had received a letter threatening the release of “foot and mouth” disease amongst the state’s cattle if prison demands weren’t met. Three houses were raided, two single Prison Action Group guys and the Catholic Worker hospitality house with warrants for animal pathogen, correspondence, typewriter etc. The State cabinet met, raised the penalty for the offence to 20 years and announced their main suspect had recently moved to Melbourne, was in the jail for a short period the previous year and house had just been raided. It looked like I (temporarily in Melbourne) was being fitted up and we took proactive action. The fact that the Catholic Worker were all vegetarians and didn’t have any intention of eating a cow let alone torturing herds with foot and mouth disease didn’t seem to stop their fantasy. Quite a bit of effort was put into mobilising the Catholic community, bishop, nuns, priests to provide protection from a frame up. The cops backed off.

During that decade there were many Special Branch and police raids in our neighbourhood (it was a time and a place dealt with in the novel/play/movie “He Died with a Falafel in His Hand“.

I was present in a police raid scene retold in the book, in the movie the scene gets transferred to/set in Melbourne and someone gets shot by the cops – which didn’t happen in the book or real life!).

Whenever there was a raid on an activist house, those raided would try to get the word out and comrades would come running or phoning or announcements would be made on student radio, sympathetic lawyers notified, and folks encouraged to get there. This is before mobiles and Internet, so getting the initial word out was a bit more problematic.

So like the other day in Ireland, it has always been a tactic when raided or detained to get the word out to make as many friends aware as possible should the situation escalate etc.
This state of affairs, and the old Queensland Special Branch, unravelled in the late ’80’s with the Fitzgerald Inquiry into police corruption.

In the last couple of months it feels as though there has been a paradigm shift!
In Feb 2003 I and four others were arrested and charged with $2 1/2 million criminal damage to a U.S. navy war plane at Shannon Airport www.peaceontrial. com . In August 2006, after three trials, I and my four co-defendants were acquitted at the Four Courts of all charges of criminal damage on the basis that the by damaging & disabling the U.S. war plane I and my four co-defendants had indeed preserved life and property in Iraq.
In the period from Feb 2003-2006 when I was suspected and charged with a serious crime I had no problem entering and exiting England or Ireland at any port or airport.
This past November 07 the paradigm shifted and things have changed.
I returned to Ireland from Australia in late October 07 to launch the documentary “Route Irish” at Seoma Spraoi and also attend a Hedge School on the Rossport campaign in Mayo. After a week I was to board a flight to London where I was taking up residence at the London Catholic Worker community www.londoncatholicw orker.org

As I was taking my bags to check in at Dublin airport, I noticed a Garda nudge another and point in my direction. I then noticed with all the haste of “I’m gonna tell mammy!” the Garda on his radio. I thought I might get stopped and questioned at Dublin airport – not a problem, didn’t happen. What I forgot was mammy is still Brittania whose lads were waiting for me when I landed at Luton. Being grateful for small mercies at least it wasn’t “Wait ’til your Uncle Sam gets home!” and straught into those orange p.j.’s

See report on being detained by count terrorist cops at Luton Airport on link http://www.indymedi a.ie/article/ 84989

Following a low key act of nonviolent civil disobedience at Northwood HQ 28/12/07, the Catholic Worker farmhouse was raided by six detectives with myself, another CW, 3 refugees and 3 children in attendance, see link http://www.indymedi a.ie/article/ 85631
Last Wednesday, I was flying back through Luton. I was stopped by one of the British counterterrorist detectives who had detained me at Luton in November.

He took my boarding pass and passport and said

“Do you remember me?”
I replied. “Yes!”
He said “Have you been involved in any protests lately!”
I replied “Well it’s a democracy isn’t it? That shouldn’t be an issue, should it?”

What I should have pointed out to him was at that very moment there were 20,000 police marching on Parliament for higher wages and asked him why was he here and not there?
Things got a little tense as he indicated he could take me back to the secure room. He eventually let me on my way.

On Saturday morning 26/1/08, I had arranged with an Afri (Action from Ireland) worker to pick me up at Euston Statioin for a lift to their Brigid’s Festival in Kildare. I stood by the side of the road opposite Euston from 9.30am waiting for the Afri van, reading and smoking. At about 10am the Afri vehicle arrived and I got in the rear door. There was the Afri guy driving, an older woman who has worked in El Salvador for the past 25+ years and three young female Afri interns from France & Italy.

After our vehicle took the turn for Kildare at the Red Cow pub, an unmarked car sounded its siren and motioned for us to pull over. Two plainclothes detectives came to the driver’s side and requested the driver’s license. They walked back to their vehicle, I said to the driver, “Those boys sound university educated!”

The detectives returned to our vehicle.

One detective, “Are you going to protest at Shannon?”

This is a major paradigm shift that is occurring during the war on terror. All protest is linked by the state to criminality.

Detective: “I want the names of everyone in this vehicle!”

Me: “What gives you the right to take our names?”

Detective leaning through the second window:

“So we have a Mr.O’Reilly here, a self proclaimed eco terrorist!”

Me: “Where have I ever self identified as that? You know that’s not true!”

Detective: “In interviews with journalists! ”

Me “You know that’s bullshit!

We are going to a religious festival and you are intimidating us!”

Me: “I feel intimidated and I don’t intimidate easy!

What right do you have to take names?”

Detective: “Under section 31 of the Offences Against the State Act!”

Vanload of people on the way to St. Brigid’s Festival suspected of terrorist activity.

By this stage the second cop has opened my door leaning into me and stretching over my back to question intern in 3rd. row of van. I suppress an impulse to push him and reclaim my bodyspace with the thought this guy wants me to hit him. The other guy is trying to provoke me verbally. Chill, keep the initiative. 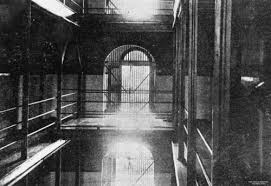 The paradigm shifts are interesting

1. All protest is associated as criminal

3. The Special Branch are sensitive around Shannon. They are not responding to a domestic phenomenon. Today there is minimal activism and organising around the issue of U.S. troops passing through Shannon to wage war on the people of Iraq.

There is faithful remnant of activists at Shannon….. but no movement. In all of 2007 there was no mobilisation at Shannon. There is none planned for 2008.

At Afri’s anti-war Brigid Festival, the word “Shannon” was not uttered until I got up and made an intervention following Briuce Kent’s keynote speech outlining what had occurred on the road to the festival. I heard “Shannon” uttered only once again after that intervention.

The Special Branch are responding to a paradigm set by Mammy Brittania & Uncle Sam. The Irish Special Branch act true to form as the product of that dysfunctional union….intimidating and harrassing pilgrims en route to the festival of St. Brigid in Kildare.

4. The Special Branch boys took our plowshares actions at Shannon and the juries affirmation & unanimous acquittal www.peaceontrial. com kind of personal. They should have taken the implicit message from the jury and investigated the high crimes occurring at Shannon. Instead from the flatfoots to the uni grad spooks they are going to make life a little harder for those who question their subservience to the imperial game that slaughters the children of Iraq, Afghanistan and maybe soon Iran.

5. The Special Branch Counter Terrorist spooks inflate, spin, lie about activists and present them as the reason for their budgets, careers and promotions.

[Editor’s Note: this essay was first posted on Sydney and Irish IndyMedia. My response – nay additions – can be read at More than ‘Fear and Loathing’ — the pilgrim’s progress]

This entry was posted in News. Bookmark the permalink.