The Blind and the Blind-folded

Which Side Are We On? 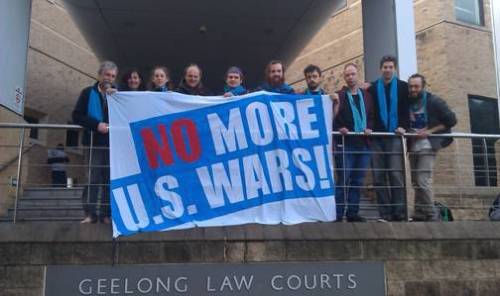 Last week Anne, Eleni and I drove 1800 kms to go to court in the chilly city of Geelong. About 10 others came from Melbourne and Geelong to attend the final court case arising from last year’s Swan Island actions, and bear witness to the power of community and resistance.

In court some of us recounted once again the assaults by Special Forces on Swan Island on October 2nd 2014. On that day four of my companions were assaulted, stripped, and had hessian bags placed over their heads with the words, “Welcome to the bag motherfuckers!” *

However it appears even with bags over their heads they managed to see more than the police officers on the scene!

The case went like this:
Sargent Knight gave evidence about arresting me with three others. When I tried to question him about the condition in which he found those assaulted the prosecutor objected on grounds of relevance. Here I got a chance to point out that there was collusion by police to conceal the real crime uncovered that day, the assault by Special Forces. I said the minor charge of trespass was irrelevant in comparison. I pointed out the link between this cover up and the cover up of war crimes by the Australian military in invading Iraq and Afghanistan and subsequent war crimes committed by SAS death squads.

At this point things took an amusing turn (in retrospect), when a not unsympathetic prosecutor somehow interpreted my statement as an attempt to run a “necessity” defence. The also not unsympathetic magistrate concurred. With originally no intention to do so, but being handed a copy of this defence by the prosecutor, I decided (with much reservation) to at least use some of the concepts of the necessity defence to allow our story to be heard.

Sargent Knight and Constable Hadden told utterly contradictory stories of what they witnessed on that fateful day. Neither saw any naked men or torn or cut clothes, nor stressed or assaulted human beings. All they saw were men “detained”, until with some prodding, both admitted seeing some of those arrested with hoods over their heads.

In fact five police officers wrote briefs of evidence for court (though only two appeared).In those briefs not one of them mentioned the condition in which they found those they arrested.

Greg Rolles and Sam Quinlan told their story of being crash tackled, cable tied, hooded, stripped, dragged around naked, and threatened with drowning or rape with a stick. Teigan Evans and I both described what we heard and observed after the assaults.

As much as I tried to point out the conspiracy by police to cover up the real crimes they witnessed, the magistrate continually pointed out that it was irrelevant to the crime here of trespass. In my evidence I offered to show ten minutes of the Four Corners program “In their Sights”.http://www.abc.net.au/4corners/stories/2011/09/01/3307694.htm.

The program details three incidences of Aussie Special forces “Death Squads” killing civilians. In one of the cases an eye witness describes a victim being stripped before being executed. The offer was declined.

The Australian Military have conducted their own inquiry into what happened that day on Swan Island. While the report has not yet been released, Senator Scott Ludlum has been told that the report found the soldiers involved had done nothing wrong.

An internal military document obtained under the freedom of information Act (and largely redacted), has a telling hand written comment by the Deputy Commander Special Operations Australia, “I agree that the actions were justifiable, but believe they could have been handled in a manner that was less likely to attract adverse media attention”. (I can email a copy on request).

As I write, a huge controversy has arisen over ABC allowing a former “Terrorism suspect” to ask a question on the “Q and A” program.

Prime Minister Tony Abbott keeps asking the ABC to declare “Which side are you on?”

When they give you two sides to be on, choose the third. I am on the side of the nonviolent Jesus, the side of the bombed, the imprisoned, the tortured, whether they be bombed or tortured by “our side” or our “enemy”.

*For an excellent article on Swan Island Peace Convergence and what happened that day, http://gregsrole.com/2014/10/16/my-take-on-swan-island-peace-convergence-2014/

The Blind and the Blind-folded.docx

One response to “The Blind and the Blind-folded”