Posted on April 30, 2015 by Workers BushTelegraph

Posted on April 30, 2015 by Workers BushTelegraph

Cutting us down … again

Municipal and state authorities are moving against Sovereign Tent Embassies again … they started in Perth in March 2012, they moved against the Brisbane Aboriginal Sovereign Embassy in Musgrave Park in May 2012. Within hours of gaining government in Quensland, Campbell-Newman ordered in 250 armed police and 32 people were arrested  … and its happening again, at The Block in Redfern and now, only a few hours ago, at Perth’s  Heirisson Island Nyoongar tent embassy.

But we will resist … keep the fire burning!

Here is the news just in from Perth.

Dozens of riot police and City of Perth rangers have again moved into dismantle an Aboriginal camp at Heirisson Island, set up in response to the State Government’s plan to close remote communities.

Officers began dismantling the camp just after 11:00 am, pulling down tents and issuing move on notices.

The tents, as well as residents’ belongings, were confiscated.

There were angry scenes as a man and two women were arrested, and several others were issued with move on notices.

Activist Gerry Georgatos said there had been 41 tents on the island last night, housing about 100 people including several family groups.

He said the protest was about homelessness, as well as the closure of remote communities.

“This is an indictment on the city of Perth,” he said.

“There were 41 tents pitched there, there were a lot of large families who would otherwise be vulnerable on the streets.”

“We saw the police coming, there seemed to be 100 or more, all the vans came, and they came in riot stuff … and they went to pull the tents down,” she said.

“One police woman was trying to push me away, and then suddenly, this big policeman came like a bull and grabbed me by my shoulder.

“They’re the violent ones, they are the criminals. 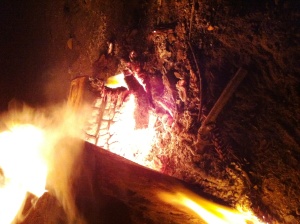 “This is our land – when I was a young girl I used to come prawning along here.”

The camp was set up early last month in protest at plans to close up to 150 Aboriginal communities, judged by the Government to be unsustainable.

Police and the City of Perth removed camping equipment from the site last month, but the camp has gradually reassembled since then.

The Commonwealth provided funding for about two thirds of the state’s Aboriginal settlements with the WA Government funding the balance.

But the Commonwealth has withdrawn its funding, and is handing over responsibility to the State Government over the next two years.