The Blood House: BHP sacks thousands in the West 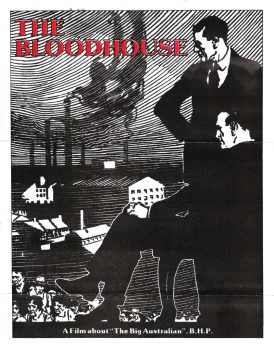 Mining company BHP Billiton is looking at cutting thousands of jobs from its iron ore operations in WA.

The miner has already announced the loss of 500 jobs in recent months, including 100 at its headquarters in Perth.

The ABC reports up to 3,000 jobs could go from BHP’s iron ore division, which currently employs 16,000 people.

A film about “The Big Australian”, B.H.P.

In the 1930’s, Australian Iron and Steel and B.H.P. commenced a massive program of industrial expansion at Port Kembla, Wollongong, in Australia.

The unemployed made homes out of the discarded packing cases in which the equipment had arrived from England. A large shanty town grew up in the shadow of the works. The hungry men would gather around the gates desperate for work. They waited for the whistle to blow.

The sounding of the whistle meant that somebody inside the plant had been injured, or perhaps killed. So there would be a new job available. By the time the victim’s blood had been washed away, the replacement would be on the job. Consequently, the Port Kembla steelworks quickly became known as the “Bloodhouse”.

As B.H.P. would not allow cameras inside the steelworks, the footage of the appalling working conditions has to be shot guerilla style without official approval.

The power of big companies like B.H.P. deeply affects the Australian economy, environment, living standards and quality of life. The film describes the effects of highly developed capitalist industry ­ the environmental pollution, the disregard for the conditions of the workers who produce the wealth but do not share in it, and the exploitation of migrant workers who were lured into a job at B.H.P. by the false promises promoted in immigration programs.

The main research for this film came from the mouths of B.H.P. workers themselves, from the wharfies and ironworkers.

The documentary delves into the political economy of monopoly capitalism in the Australian context.

The “Big Australian” is exposed as having extensive links with foreign capital and other big monopolies.

This film is relevant to anyone interested in worker’s safety, class struggle, migrant workers, political economy and, of course, Australia’s richest, most powerful company, The B.H.P.

You can view the film on the Radical Times Historical Archive by scrolling down to the second section headed “N.S.W. Resources” and then clicking on item 1C on the grid.   The thumbnail image is the same as the one seen above on the brochure.

Credits
The Bloodhouse – a film by Garry Lane (16mm, 24 minutes)
Narration written by Humphrey McQueen (and Garry Lane)
With thanks to Martha Ansara, Chris Tillum, and Larry Zetlin
The film premiered at the Sydney Filmmakers’ Cooperative in 1976
Also available from the Australian Centre for the Moving Image in Melbourne and the National Film and Sound Archive in Canberra.

Posted on June 25, 2014 by Workers BushTelegraph Leave a comment

This entry was posted in Recent, Unions, Workers Political Organisations. Bookmark the permalink.