The Rohingyan Muslim community face a crisis in Myanmar (Burma).

Victims of persecution and ethnic cleansings, thousands of refugees have been stranded in the Malacca Straits.

Governments are turning back boats showing no regard for human life.

“… it was eventually down to Acehnese fishermen to rescue the boat on Friday, towing it to shore in Langsa.” [‘They Hit us with hammers’ – The Guardian]

Is this a viable ‘regional non-punitive solution'(sic)?

4ZZZ journalist Martin Brown interviewed Mark Gillespie from the Refugee Action Collective Queensland, who is organising a rally in King George Square at 5pm on Friday, May 22nd to protest governments’ involvement in turning back the boats and allowing refugees to drown at sea or rot on land.

Like shooting an elephant
Parliament is a sideshow, any government that will call mothers ‘rorters’ and promote drowning at sea is discredited. Barnaby Joyce created a diversion to avoid any serious debate on the human crisis at our doorstep.
Aboriginal people made refugees in their own land.

In a job like that you see the dirty work of Empire at close quarters. The wretched prisoners huddling in the stinking cages of the lock-ups, the grey, cowed faces of the long-term convicts, the scarred buttocks of the men who had been Bogged with bamboos – all these oppressed me with an intolerable sense of guilt. But I could get nothing into perspective. ‘Shooting an elephant’ by George Orwell.

End the colonial state, give back the homelands, support the refugees. 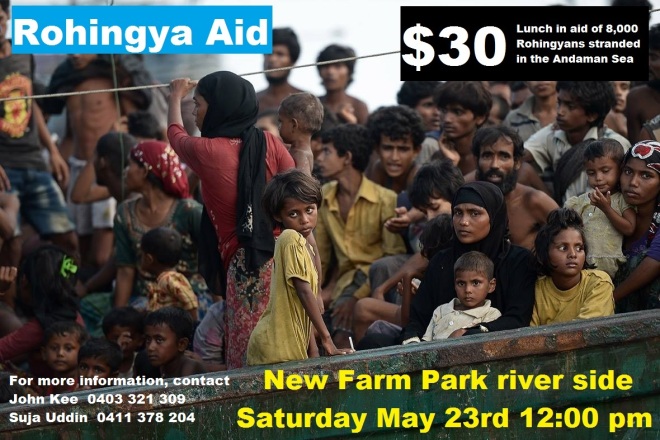