Posted on December 8, 2014 by Workers BushTelegraph

Robert Fisk: Isn’t it important to realise who our enemies really are?

Posted on December 8, 2014 by Workers BushTelegraph | Leave a comment

Well, heaven preserve us: the most useless “peacemaker” on earth has just used an Arabic acronym for the greatest threat to civilisation since the last greatest threat. Yup, ol’ John Kerry called it “Daesh”, which is what the Arabs call it. It stands for the “Islamic State in Iraq and the Levant”. We prefer Isis or Isil or the Islamic State or Islamic Caliphate. Most journos prefer Isis because – I suspect – it’s easier to remember. It’s the name of an Egyptian goddess, after all. It’s the name of a university city’s river. And of course, it’s the name of Lord Grantham’s dog in Downton Abbey.

Many an American scribe has questioned why Kerry should be using this goddam Arabic lingo – although we use Fatah for the PLO. It, too, is an acronym which, translated, means “the Party for Palestinian Liberation”. And in 2011 we called Tahrir Square in Cairo “Tahrir”, only occasionally reminding readers and viewers that it, too, meant “liberation”. None explained why the place was important: because this was the square mile of Cairo in which was based the largest British barracks and into which the Brits – during their much loved occupation of Egypt – refused to allow any Egyptian to walk without permission. That’s why it was called Tahrir – liberation – when the Brits left. That’s why Hosni Mubarak’s attempt to prevent the protesters entering the square in 2011 placed him firmly in the shadow of Egypt’s former colonial masters.

But why do we care what the great leaders of the West (or the East for that matter) actually say, when we all know it’s the kind of material that comes out of the rear end of a bull? Let me give you an example from Canada, where I’ve just spent the last three days. Two years ago, the country’s Foreign Affairs minister, John Baird, closed Canada’s embassy in Tehran because he feared his diplomats might be harmed. “Canada views the government of Iran as the most significant threat to global peace and security in the world today,” he quoth then – although CBC broadcasters have dug up a Foreign Ministry report which reported the biggest threat to the Tehran embassy was an geophysical earthquake. 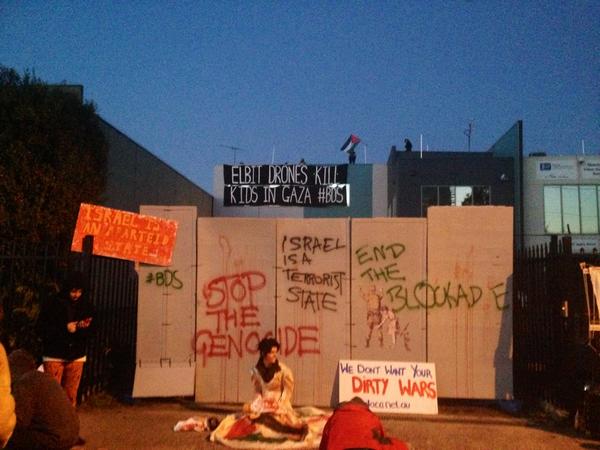 Melbourne activists scale Elbit Systems, an Israeli firm that makes drones. They were arrested. BDS is an NVDA to challenge the military industrial complex. It comes from Palestinian civil society. Dec 2014.

Read more: . Al-Jazeera journalists imprisoned by Egypt to ‘teach Qatar lesson’ . Capture of Isis leader’s wife is another murky tale . Do you know the difference between a Holocaust and a holocaust?

Since then, as the Toronto Star’s pesky columnist Thomas Walkom has pointed out, the Canadian Prime Minister Stephen Harper – whose pro-Israeli policies might earn him a seat in the Israeli Knesset – has discovered more threats. Russia under Vladimir Putin, Harper says, “represents a significant threat to the peace and security of the world”. The aforesaid Baird – taking his cue, no doubt from our own beloved Prince Charles – compared Putin’s Russia to Hitler’s Third Reich. More recently, Canada’s defence minister, Rob Nicholson, described the men of Isis (or Isil, or the Islamic State, or the Islamic Caliphate, or Daesh) as “a real and growing threat to civilisation itself”. The war against Isis/Isil/IS/IC/Daesh, he informed the people of Abu Dhabi, was “the greatest struggle of our generation”.

Well, blow me down. Wasn’t Iran the greatest threat, ever since 1979? Wasn’t Abu Nidal, the Palestinian gun-for-hire? Wasn’t that British prime minister chappie, with the odd left eye and the habit of saying “absolutely” and “completely” over and over again, convinced that Saddam was the greatest threat to our civilisation/generation, what with all his WMDs and links to al-Qaeda and tubes from Niger, and so on? For that matter, wasn’t Osama bin Laden’s al-Qaeda – the very bunch which morphed into Isis/Isil/IS/IC/Daesh in Iraq – the greatest threat to our civilisation/generation?

Yet now, when the Iranian air force has joined the battle against Isis/Isil/IS/IC/Daesh alongside the US, Britain, Canada, Australia, old Uncle Tom Cobley and all, Kerry – in “Daesh” mode – tells us that the Iranian military action in Iraq (in any other circumstances, a ruthless assault on Iraq’s sovereignty) is “positive”. And Kerry, remember, was the fellow who told us last year that America was going to attack the regime of Bashar al-Assad, the greatest enemy of Isis/Isil/IS/IC/Daesh – whom Obama reprieved in favour of bashing Isis/Isil/IS/IC/Daesh itself – with its ally Iran described by Canada’s Baird only two years ago as “the most significant threat to global peace and security in the world”.

But what the hell . Don’t we live in a world where Save the Children (American branch only, you understand) gave an award to the same former British prime minister quoted above? Having given a prize to the man who encouraged George W Bush to embark on an Iraqi invasion which cost the lives of tens of thousands of children, surely this fine charity (again, the American branch only) must reinvent and re-name itself “Abandon the Children”. And by the way, one of the ex-PM’s supporters blandly told Channel 4 not long ago that our British “peace envoy” had travelled to the Middle East more than 160 times. Which means, doesn’t it, that our Middle East envoy had left his station in the Middle East more than 160 times!

But again, what is a child’s life worth? In 2002, a Israeli missile attack on a Gaza apartment block killed a Palestinian militants but also 14 civilians, including several children. The Bush administration – draw in your breath here, folks, and grit your teeth – said that this “heavy-handed action” did not “contribute to peace”.

Wow, now that was telling them. Killing kids is a bit heavy-handed, isn’t it? And I can see what the Bush lads and lassies meant when they said that eviscerating, crushing and tearing to bits a bunch of children didn’t really, well, “contribute” towards peace.

It’s important, you see, to realise who our enemies are. Muslims, Iranians, Iraqis, Syrians, Russians, you name it. Not Israel, of course. Nor Americans. Think generational. Think civilisation. Think the most significant threat to global peace. Daesh. Isn’t that the name?

Give me the Persian Gulf any day.

Posted on December 8, 2014 by Workers BushTelegraph

Three refugee high school girls were confronted by around 15 teenage Nauruan boys around 11.00am, last Friday (5 December) at their class room at Nauruan College. The boys came to the refugees’ English class, threatening and abusing them before physically … Continue reading →