[Publisher’s Note: The ABC focus in the 7.30 report last night was on the violence and not what people are saying they want, what concerns them – stolen lands, stolen children, first nations sovereignty, low wages, bad jobs, decolonisation before profit, poverty in developing countries, austerity in advanced countries. Should we speak to the mainstream media? If so, on what terms? In the ABC’s 7.30 report of 31 October it broadcast  interviews with one person from Brisbane Aboriginal Sovereign Embassy (Boe), one person from BrisCan (Adrian), a legal observer (Dan) and an academic who says that police containment of protests is possible without violence. But we know that is not true … that there is always police violence, in London, in Toronto, here in Queensland every day. Police taser people, murder people in custody … so why even negotiate with police while this is going on? BushTelegraph’s pages are full of instance after instance of police violence, especially government sponsored violence against aboriginal people, and against aboriginal children i.e DOCS taking children from their families and their culture. Can our voice be heard above the din of violence created by the G20? You can do better, ABC. You missed the point!

The transcript of the ABC TV report is below, I have included our own archival footage and pictures that the ABC did not show, particularly the 1982 film Guniwaya Ngigu (We Fight) by the Black Film Unit — Ian Curr 1 Nov 2014]

MATT WORDSWORTH: First tonight to the event that stops a city. The G20 is just two weeks away and nerves are building. The world’s top Leaders will be in town discussing issues that will affect everyone. But those not invited want a say too. So how will police and protestors negotiate the delicate balance between civil rights and civil disobedience? Kathy McLeish has speaking with both sides. 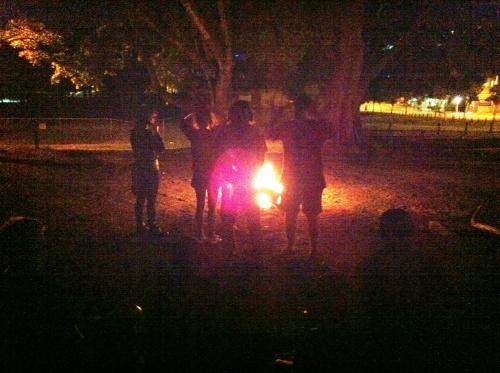 KATHY McLEISH: It’s a small gathering now. But in a fortnight busloads of indigenous people will join them to take part in a series of meetings.

BOE SPEARIM: When we look at what we face as aboriginal people in this country whether it’s over-incarceration, the high deaths in custody rate. On any other given day we seem not to be heard but with the world leaders and the world media coming this gives us the chance to get our message out.

KATHY McLEISH: It’s not the first time the world’s eyes have been on Brisbane. The city’s hosted Expo ’88 and the Commonwealth Games.

KATHY McLEISH: Rallies focused attention on Land Rights and the controversial Aboriginal & Torres Strait Islander acts. In preparation for the games the Government had passed special laws protesting was banned.

BOE SPEARIM: With the protesting and the demonstrating and the resilience of the Aboriginal people getting arrested put in the Watch house getting out and doing it the next day resulted in the repeal of that Act.

KATHY McLEISH: In preparation for this year’s G20 Queensland brought in new laws again including special police powers. And once again the world will be watching. Dr Alex Haslam specialises in crowd behaviour. He says past G20s have been instructive.

KATHY McLEISH: Four years ago, a small number of violent protestors sparked a massive police action in London. Later an independent commission criticised police for excessive use of force and a tactic known as kettling.

KATHY McLEISH: The next year, Toronto’s peaceful protestors were infiltrated by a minority and police responded. More than a thousand people were arrested only 44 were charged. Subsequent reviews found massive breaches of human rights.

ASST. COMM. KATARINA CARROLL, QLD POLICE: When you look at Toronto there was close to 1300 people arrested and a lot of them were actually innocent bystanders. There was extraordinary lessons that came out of Toronto and I feel very very comfortable that those lessons have been implemented in our planning.

KATHY McLEISH: Dr Haslam says QPS does have an opportunity to set a new standard in policing.

DR ALEX HASLAM: I think they have been looking at best practice around the world.

DR ALEX HASLAM: Most of the people in crowds are there for a good reason and they’re actually exercising their legitimate rights whether it’s to go to a football match or to engage in protest and if you treat that group of people as if they’re just all criminals then they will turn against the police and against the authorities and align themselves with those elements who are intent on violence. So actually you get a spiral of activity which is very, very destructive, very, very counter-productive.

KATHY McLEISH: Tony Clark is a Queensland police negotiator one of a team who’ll talk to protestors throughout G20.

*QUEENSLAND POLICE: We’ve basically given it three hours but it won’t take that long.

*QUEENSLAND POLICE: So the march is supposed to start at 9.30?

*QUEENSLAND POLICE: Yep.
*[Publishers Note – the ABC transcript is incorrect here – it confuses a short exchange between QLD Det Sgt and an editor of the Brisbane Blacks magazine, Callum Clayton-Dixon. By the way the other police negotiator Det Tony Clarke cut his teeth in the police force by arresting SEQEB workers 1001 of whom had been sacked by the Bjelke-Peterson Government in 1985.]

TONY CLARK: We don’t want to see those scenes, this is Brisbane this is not another city we want peaceful, respectful protest where everyone gets to have their say.

KATHY McLEISH: So far, police are liaising with 24 groups including the Brisbane Community action network.

ADRIAN SKERRITT, BRISCAN PROTEST GROUP: We are 100% committed to a peaceful rally. We’ve communicated that very clearly to the police liaison officers we’ve spoken with. The police said to use that the criteria for a good event will be zero arrests and we think that’s fantastic.

KATHY McLEISH: Engaging with groups early is a recognised strategy but it won’t work with groups that don’t emerge until the event and may be intent on trouble.

ASST. COMM. KATARINA CARROLL: We’ve always said we will support peaceful and lawful protest. However if there is damage caused, if there’s disruption to the event or anyone’s hurt we will be very, very swift and affirmative in our action.

KATHY McLEISH: Earlier this week the Queensland Police Service used its special powers to prohibit two people from the event amid reports of an anonymous plan to wreck public property. Alex Haslam says restraint is the key.

DR ALEX HASLAM: Where there are pockets of problems you go in and you deal with those but you embrace a mindset. No the majority of people are here to do something reasonable and legitimate and we want to allow them to do that and where the police engage constructively with crowds in that way the crowd actually self polices and it says no we don’t want these fringe elements in here spoiling our parade or our protest or our game of football that’s really a cost effective thing to do if you can get the public on your side.

KATHY McLEISH: Despite all the planning, there’s no question this will be a highly charged environment. And in the event that things don’t go to plan teams of legal observers will be in the crowd watching just as they were in London and Toronto.

LAWYER: Basically what we want to do is zoom in.

DAN ROGERS, CAXTON LEGAL CENTRE: It’s hoped that their presence and their filming in a public space will temper not only the behaviour of police who have very broad and special powers, but also the behaviour of protestors.

KATARINA CARROLL: Looking forward to delivering successfully one of the most complex events Australia’s ever held and I’m very confident that it will be very very successful and we will get there.