Now. I am a Capitalist. And all these raw materials belong to me. Don’t matter for now how I got hold of them, or whether I have any right to them. Fact is that all the raw materials are now the property of the Landlord and Capitalist class. That’s me.
– Owen from The Ragged Trousered Philanthropists 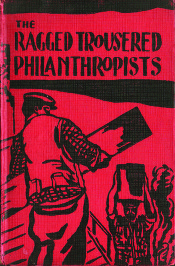 CRASS: Wot’s become of the Professor then?

EASTON: We ain’t had no lectures from ‘im lately, since he’s been working on the droring-room

SAWKINS: Damd good job. Gi’s me the pip to hear ‘im, the same thing over and over again.

HARLOW: ‘E does upset himself about things, don’t he?

SAWKINS: Well, what’s the use the likes of us worryin’ our ‘eads about politics?

HARLOW: I don’t see that. We’ve got votes, so we ought to take some interest but I don’t see no sense in this ‘ere Socialist wangle that Frank’s always talking about.

CRASS: Nor does no body else either.

OWEN: So it is – the main cause of poverty.

PHILP: Gentl’men. Professor Owen is goin’ to give us ‘is well known lecture, Money as the Main Cause of Bein’ Ard Up, proving as money an’t no good to nobody. At the hend a collection will be took to encourage the lecturer.

CRASS: See. It’s all very good saying these things. Provin’ it is a different thing.

OWEN: Right. I’ll show you the Great Money Trick. Now for the purpose of this demonstration I shall need the help of members of the audience. May I borrow your knife, sir?

OWEN: Has anybody got any bread they can spare?

(He adds the bread he collects to his own.)

OWEN: These pieces of bread represent the raw materials which exist naturally in and on the earth for the use of mankind; they were not made by any being, but were created by the Great Spirit for the benefit and sustenance of all, the same as were the air and the light and the sun.

OWEN: Now. I am a Capitalist. And all these raw materials belong to me. Don’t matter for now how I got hold of them, or whether I have any right to them. Fact is that all the raw materials are now the property of the Landlord and Capitalist class. That’s me.

OWEN: And you three (Harlow, Eston, Philpott) are the Working Classes; you have nothing and while I’ve got all this raw material, they are no use to me – what I need are the things that are made of these raw materials by Work; but I am too lazy to work myself, so I have invented the Great Money Trick to make you work for me. Now not only do I own all the raw materials, but these three knives stand for all machinery. All the tools of production; factories, railways.That skim through the consequences leaves us with a variant on the opening question: if capitalism can indeed collapse, can it also rise again? To approach an answer we must look again at the 1930s. The conventional belief is that Roosevelt’s New Deal rescued the US. In truth, the downturn of 1938 was as steep as that at the start of the deflationary cycle. What dragged the world out of depression was global war. That gale of destruction lost some of its creative promise at Hiroshima.

And these three coins, (takes three halfpennies from his pocket) stand for my Money Capital. Got it?

OWEN: These squares represent the things which are produced by labour, aided by machinery, from the raw materials. Let’s say there of these blocks make a week’s work; and let’s ay each of these ha’pennies is a sovereign. We’d be able to do the trick better if we had real sovereigns, but I forgot to bring any with me.

PHILP: I’d lend you some. But I left me purse on the grand pianner.

OWEN: Now you three say you are in need of work, and as I am kind hearted Capitalist, I am going to invest all my money in industries, to give you PLENTY of WORK. I’ll pay you a pound a week, and for a week’s work you must produce three of these square blocks. Then I give you a pound. I take what you produce, but you can do whatever you want with the pound. Fair enough? Set to then.

(The men cut the pieces into threes.)

OWEN: Here’s your pound. (He gathers the pieces to himself.) Now these blocks represent the necessities of life. Food, Housing, Clothing, Everything. Now you can’t live without them, so you’ve got to buy them off me. And my price for one of these is – one pound.

(The men buy and devour the bread.)

OWEN: I’ll have two ‘cos I’m greedy. So I’ve four pounds in produce, me three sovereigns back, what you got?

PHILP: Nothing, I just ate it.

OWEN: Want to work then, do you?

(They repeat this several times, until a pile of wealth has accumulated for the Capitalist.)

(Owen suddenly grabs back the knives from the men)

OWEN: Bad news, chaps. Owing to Over Production all my warehouses are glutted with the necessaries of life. So I’ve decided to close down the works.

PHILP: What the bloody ‘ell are we to do then?

OWEN: That’s not my business. I’ve paid your wages, fair and square. Given you PLENTY OF WORK for a long time. No more work at present. Come round in a couple of months.

HARLOW: But what about the necessaries of life? We’ve got to eat someat, an’t we?

OWEN: Course you have. And I shall e very pleased to sell you some.

EASTON: But we an’t got no bleedin’ money.

OWEN Well, you don’t expect me to gi’ you my stuff for nothing, You din’t work for me for nothing. I paid you. You should have saved something, Should have been thrifty, like me!

PHILP: Here, if you don’t gi’ us something, what’s to stop us takin’ it.

OWEN: I appeal to your sense of decency. Fair play.

OWEN; If you are not more polite, I’ll have to get my friends the police down here, and they may be forced to bash your faces in, so as to protect an honest man from villains.

HARLOW: Well, that about takes the biskit.

EASTON: What are we going to do?

PHILP: We’ll have to ‘ave an unemployed procession.

(They make a procession)

We got no work to do

We got no work to do

We’ve been working too damned hard.

We’ve got no work to do.

(The crowd jeer at them, and try to spit in their hats.)

PHILP: We won’t get nothing out of this lot. Let’s try the old religious dodge, that always makes them part up.

(The others join in the song. At the end, the kind Capitalist drops a coin in.)

PHILP: A sovereign! Bless you, sir.

OWEN: There you are. (He takes the coin back.)

(The unemployed sing “For he’s a Jolly Good Fellow”)

HARLOW: Here, Mr Kind Capitalist, would you allow us to elect you to Parliament?

The Ragged-Trousered Philanthropists is a novel by Robert Tressell first published in 1914 after his death in 1911. An explicitly political work, it is widely regarded as a classic of working-class literature. – Wikipedia