Wednesday the 3rd of December

The meeting will be addressed by Dr Greg Mallory, expert on the history of the game that is so powerful in the consciousness of the highly educated and politically aware as to be the only thing for which on previous rare occasions meetings of the 17 Group have been postponed.

“In February 1936 George Orwell visited Wigan as part of his research for The Road to Wigan Pier. Shocked by the poverty and unemployment in the town, he nonetheless found that his journey confirmed most of his prejudices: the lower classes smelled, ‘no genuine working man’ was truly a socialist, and the English working class did not ‘show much capacity for leadership’. On the basis for his two month trip around Lancashire and Yorkshire he declared that the working man ‘does not act, but is acted upon’. Indeed, Orwell made little attempt to engage with the working-class people and families he met or to understand the culture of their daily lives.

This book is about one aspect of working-class life in Wigan and the north of England that Orwell chose to ignore completely. Less than half a mile from his lodgings in Wigan stood Central Park rugby league ground. On Orwell’s first Saturday in the town over 15,000 working-class Wiganers assembled to watch their team take on Liverpool Stanley. If he had joined them, he would have discovered a vibrant, thrilling spectacle and watched almost exclusively by working-class men and women. 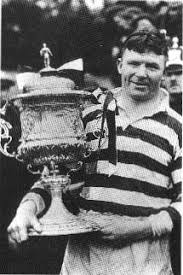 Wigan’s team featured athletes from around the world at the peak of their powers. Among them were full-back Jim Sullivan, one of rugby league’s greatest-ever players; George Bennett, the first black player to appear in a league international; Hector Gee, an Australian who had travelled halfway around the world to play for Wigan; and Charlie Seeling, a New Zealander whose father had played for the 1905 All Black tourists but who had made his home in the town. Not only did these players share the working-class origins of those who watched them, but they also shared the same sense of collective injustice. Rugby union’s strict amateurism had forced Sullivan to leave Wales as a teenager. Bennett had switched to league to reach sporting heights previously unavailable to him because of the colour of his skin. Players and spectators alike believed that their game was unfairly relegated to the status of a minor sport by the class snobbery and regional bias of a southern-based establishment. In this, it was a metaphor for the position of the industrial working classes in the north of England

Orwell, whose failure to comprehend the cultural aspects of working-class life was also typical of almost all middle class observers of his era.

And even if he had attended the match at Central Park in 1936, his mix of pity and condescension would have probably blinded him to its broader significance. He would, however, have witnessed a small piece of history being made. For the first time and only time at Central Park, little Liverpool Stanley defeated the mighty Wigan.”