It is the interaction between these institutions that gives the state absolute power to warehouse refugees on Nauru or elsewhere. 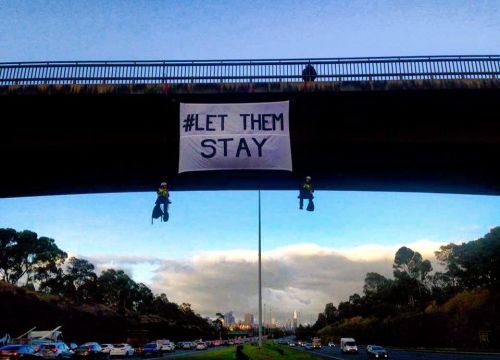 The prevailing view in Australia (not the Left’s view) is that refugees who arrive by boat should not be given sanctuary in Australia. How that view is put into practice is a rather complex question.

Democratic?
Let’s make a big assumption for the moment that the Australian parliament is democratically elected and the constitution is valid (there are plenty who dispute both including most aboriginal people who never ceded the land that was stolen from them … 90 years of rulings by the high court based on legal fictions like Terra Nullius was a constitutional con foisted on both black and white Australians).

The parliament passed immigration laws to prevent refugees coming to Australia by boat but the parliament alone lacks the power to enforce these laws.

More than this, these laws are and remain a fiction throughout the process of warehousing refugees.

Under the current law, baby Asha currently held in the Lady Cilento Children’s hospital is deemed by the High Court to be an “unlawful non-citizen”. But baby Asha will not be deported because police cannot storm into a hospital and take a baby away. The prevailing norms of society prevent this from happening, at least in the current situation where doctors and nurses remain opposed to it. This said, the baby can’t stay there forever either. Her treating doctors refuse to discharge the infant until a “suitable home environment is identified”. Her father is in detention at Pinkenba and her mother is allowed visit her.

Recently the High Court interpreted laws enacted in the parliament resulting in the mistreatment and abuse of refugees on equatorial Nauru, a tiny spec in the Pacific Ocean far from privileged suburbs of Canberra. The response to that judgement from ordinary people has forced church and state leaders to offer sanctuary to the 267 refugees including their children who may be deported.

Reformist government overthrown
In 1973 the Whitlam government passed laws to ensure that race would be disregarded as a component for immigration. This followed widespread street marches and protests against apartheid (supported by the Queensland government) in 1971 during the Springbok Rugby tour of Australia.

In November 1975, there was a large rally in King George Square which was addressed by Gough Whitlam. For the second time in Australian history a governor, under the pretext of representing the monarchy and the interests of Australian people, dismissed an Australian government.

In Queensland Bjelke-Peterson had been making strong attacks on democratic rights. At the time Petersen ruled Queensland with 18% of the popular vote. Added to this, acting on information from corrupt special branch officer, Don Lane, Bjelke-Peterson refused to appoint Justice Douglas as Chief Justice of the Supreme Court of Queensland merely because Douglas voted Labor in the 1977 elections. Bjelke-Peterson later appointed Don Lane Transport Minister.

The refugee’s lawyers did not contend otherwise. Mr Justice Keane held that the plaintiff was detained on Nauru by Nauru. Some of the other judges disagreed.

Keane ruled that the Nauruan government has control over what happens to the Bangladeshi refugee, not the Australian government. The judges held that the High Court of Australia does not rule on the legality of laws of other sovereign nations.

The Bribe
The Australian government gave the President of Nauru $27,893,633 to detain refugees on regional processing visas. However, according to Justice Keane, if the matter is not resolved administratively within a reasonable period that detention will become unlawful.

The reason is that ‘unauthorised maritime arrivals’ being detained on Nauru is a temporary arrangement only. If M68 is deemed to be ‘a refugee’ and arrangements are not made to move her from the regional processing centre in Nauru within a reasonable time frame, her detention and funds given in exchange for her Nauruan visa will become unlawful.

Unfortunately former judge, Ron Merkel, acting for the Bangladeshi woman, did not ask the High Court to rule on whether her detention since she arrived on Christmas Island in 2014 was unreasonable.

For the purposes of immigration, Christmas Island is not part of Australia.

The Bangladeshi woman was then warehoused on Nauru with the aid of Transfield Services and Wilson Security. She became ill at 20 weeks into her pregnancy and was brought to Brisbane for treatment after which she was detained by the Australian government at the Pinkenba detention centre.

The High Court ruled that, although M68 was brought to Australia, she was still an “unlawful non-citizen” and that Australian authorities had the right to detain her.

The High Court ruled that “unauthorised maritime arrivals are aliens within the meaning of s 51(xix) of the Constitution”.  Neither the plaintiff’s lawyers nor any other person has suggested that this is not a correct statement of the law.

As we know the regional processing of refugees on Nauru is punitive and racist.

However the High Court ruled that the immediate purpose of regional processing is the removal of ‘unauthorised maritime arrivals’ from Australia.

The plaintiff’s lawyers submitted that regional processing is punitive because it is designed to have a deterrent effect on the movement of asylum seekers as part of a submission that the power to punish can only be exercised by the Courts and cannot be exercised administratively and that legislation purporting to grant that power is therefore unconstitutional and invalid.

Based on ‘agreed facts’ put forward by M68’s lawyers, Mr Justice Keane held that the immediate purpose of the legislation is the facilitation of the removal of ‘unauthorised maritime’ arrivals from Australia.

Mandatory Detention
Australian governments since Keating was Prime Minister have accepted restrictions placed on the liberty of refugees. This is called mandatory detention.

The High Court ruled that the Commonwealth may cause a restriction on the liberty of an ‘alien’ in the country to which M68 was removed only if that restriction is reasonably capable of being seen as a necessary condition of the willingness and ability of Nauru to receive refugees for regional processing.
In other words, the commonwealth has power to do what it has done.
This does not mean that the judges or the court consider that it is right to do so, only that it is lawful.

The High Court also ruled that the plaintiff refugee must pay costs of her action to the defendants which include the Australian government, Transfield and to Wilson Security. The matter would not have gone to the High Court without a guarantee (by someone) that these monies would be paid should the case be lost.

The role of the High Court is not to usurp the function of the parliament and substitute its views on policy, contrary to the constitution; otherwise Australia would be governed, not by representatives elected every 3 or 6 years, but by appointees with tenure until they are 70.

However not all the Judges agreed in the case of the cruel detention of M68 . Gordon J. supported the case of the plaintiff so far as the plaintiff’s case as presented permitted, and held that the case should be remitted to the Federal Court for further findings of facts to enable the court to consider the orders sought.

Has the state done the right thing by refugees?
Many think not.

Current appeals to Malcolm Turnbull by #Let Them Stay and others should take into account the power of state institutions denying refugees asylum in Australia. As opposition to the 2003 war in Iraq demonstrated, to win asylum for refugees requires more than convincing enough people, we need also to overcome rigid institutions such as parliament and courts.

The state will not allow asylum seekers land and stay in Australia without radical change to institutions that make it up. Conservative churches have offered the 267 refugees sanctuary. Do these churches have the ability to house 267 people that the state is attempting to deport? Peter Catt from St John’s in Brisbane says he can provide sanctuary and he has the backing of 10 members of his church council. Presently most of the refugees are in detention under the control of the state, so how are they to make it to the church for sanctuary should deportations to Nauru commence? And, even if they do, won’t that make it easier for police to round them up?

Personally I have optimism but no faith.

16 thoughts on “#LetThemStay: optimism without faith?”