Yesterday (22 Jan 2016) I attended Harley’s funeral in Stanthorpe with friends Joanna, Joseph, and Katherine. It was a big funeral with a large section of the community of Stanthorpe turning out on a hot day.

Harley at a demonstration in King George Square, Brisbane (circa 1977)

Harley was born and grew up in Williamstown Victoria, one of five boys. His mother passed away when he was young. He came to Queensland in the 1970s and participated in the political life of Brisbane at the time.

Through his involvement in Friends of the Earth and The Learning Exchange in West End, Harley helped organise and participate in blocking export of uranium through the Brisbane docks at Hamilton No 4 wharf.

In early August 1977, Harley stood on the railway tracks to stop the uranium train from going through. Chris tells the story of how Harley, looking to the heavens, with his fist in the air and surrounded by police,  burst into song: 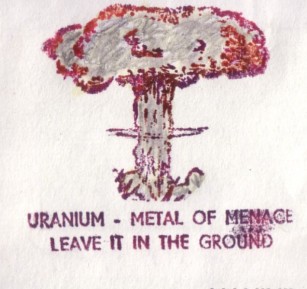 The police pushed us off the tracks into a big pile on the ground as the uranium train went through onto the wharf. In the process some of us were arrested: Geoff and Nancy Wills and Charlie Scandrett.

However we persevered and soon had many more trying to block uranium shipments.  As a direct result of this mobilisation of people opposing Uranium mining and export, Bjelke-Petersen banned street marches in Queensland on 4 Sept 1977. This led to the civil disobedience campaign of 1977-1979 in support of democratic rights such as the right to march.

Harley and others at a picket outside Boggo Road jail in Brisbane 1978 supporting activists locked up under the street march legislation.

Our view of Boggo Road protected by uniformed, special branch and plain clothes police. Of the 3,000 arrests during that period a number of people went to jail.

Street marches
Harley was active in these campaigns, not pushing himself forward but doing hard behind-the-scenes work. For example, Harley who had a gift for detail helped screen print thousands of  posters to advertise defiance actions against state and federal governments and their policies on democratic rights.

It was direct action by grassroots people like Harley rather than legal and parliamentary manouevres that eventually led to the downfall the Bjelke-Petersen government in 1987.

Another person from the Learning Exchange, Jessica, summed up Harley in this way:

“Harley was an important person in our circles, who  cared for the people around him as well as being always ready for an argument about the political issues of the day. I remember him jumping up on a soapbox to have an anti-Bjelke rant in King George Square and of course, saying “fuck” which meant an instant arrest at that time. I rushed to help “de-arrest” him and was then surrounded by cops myself…”

Anti-uranium picket on the wharves August 1977.

Jessica is referring here to Harley’s arrest at a demonstration for the right to march on 22nd September 1977. He was arrested with 20 others. Police used a variety of offences some relating to the new street march laws and others old stand-bys like the obscene language charge Harley was arrested for. All 20 of those arrested were bailed out by the Civil Liberties Co-ordinating Committee’s defence fund. Harley appeared in court on 16 Jan 1978 and was convicted but interestingly no fine was imposed.

Harley was a key witness in the defence of another democratic rights activist, Joseph, who was also arrested for ‘obscene language’ down on the wharves. Harley gave detailed and accurate evidence showing that Joseph (not given to swearing) was the victim of police fabrication. The magistrate rejected Harley’s testimony in favour of the police on the flimsy basis that Joseph should have given evidence first and then asked Harley to take the stand to corroborate his testimony.

Many stories about Harley were exchanged during the funeral and afterwards at the nearby TAFE at Stanthorpe.

Joanna tells the story of how Harley, at a re-union some years ago, had people in stitches recounting his experience of working at Golden Circle Cannery.   Harley managed to work in several sections of the factory. His recounting was done with full physical actions of what was required of him and the interactions between himself and others. Harley’s arms and hands and whole body actions meant it was like a ‘pop-up’ theatre experience – as good as a Billy Connolly show.

The co-ops and move to Stanthorpe
Harley was very active in organising good food co-ops that brought cheap and healthy food to many who were often on the dole. He helped set up the food co-op at the Paddington Workers Club and later moved up to Stanthorpe with Siobhan Hayes where he was active in a food co-op there, built a stone house and involved himself in community life from  farming,  Landcare, rural fire brigade and protection of wildflower seeds.

It is interesting that Harley, the person that we knew as an anarchist, had managed to become accepted into a conservative rural community that is still a stronghold for the National Party in Queensland. No doubt this took a lot of effort by Harley but he was aided by his  natural gifts of friendliness and wit.

At the graveside Geraldine recited this poem about Harley:

Some life-stoking jokes
that will rattle his bones from the
inside out
Laughs to jingle and tingle him
into losing
His sad eyes that show the pain and
loss and hurt and the
Unreadiness to go.
We’ll caress those eyes with gentle
chatter of shared memories and quips
until we ease into a familiar embrace of
fondness and love

A myriad of words
That danced behind our eyebrows
The love and detail of those words
Jumped lightly from idea to truth to
fantasy to fiction
And back again to some. idea that
flowed easily and kind1y

Into a conjunction of people
Around the teapot of communion.
An easy balance of doing and ideas
That got going to make and fix and

laugh and give a new angle of watching
and looking
to form a fresh awakening and ease us
across steady and different bridges
The lanky lean twitching
Of loose hips joyously dancing to
Joan Jett
Knowing the abandon was there
together with the care
And the dedication to the room of
lively souls
He could easily touch with a gay
abandon of those eyes.

Condolences to Siobhan, the West and Hayes families.

Harley and I had a sort of standing joke. We had both been before the magistrate so many times and heard our full names read out in court so often that I always greeted Harley with his full name ‘Harley Robert John West’.

We have lost a good friend and comrade from many a struggle.

One response to “Vale Harley West”