Lies that fed the NT Intervention. 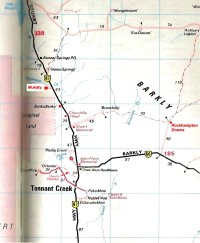 Refreshments from 4pm, presentation by Chris Graham at 5pm, music until midnight.

Ampilatwatja Nation (pronounced um-bludder-witch) is a community of up to 650 people 350 km north-east of Alice Springs (Mparntwe Country) and affected by the NT Intervention.
Some months ago Turnstyle hosted a fundraiser for Ampilatwatja where we raised $1600 and we are looking to do it again.

A night of music, food and fun, and a presentation from
Chris Graham – The Lies that Feed the NT Intervention.

Details about the speaker – Chris Graham

Last year, Chris Graham toured Australia with an explosive presentation ‘The Lies that Built the NT Intervention’, which revealed that the ABC Lateline program falsified much of its reporting that led to the 2007 Howard government policy.

Chris is back in 2011 with a new presentation: The Lies that Feed the NT Intervention. His latest expose looks at the original myths used to found the NT Intervention and in particular he focuses on the greatest myth peddled by media and government today – that it’s the ‘urban Aboriginal elites’ in the cities who oppose the Intervention, while Aboriginal people on the ground in the Territory actually support the policy.

Using government reports and data from the 2007 and 2010 federal elections, Chris Graham exposes the lies that not only feed the NT intervention, but allow the largest human rights violation of our generation to continue.

Chris also discusses a new form of reporting – Agenda
Journalism – and why it is the future for reporting Indigenous affairs, and minority interests.

Chris is the managing editor of Tracker magazine, a new publication produced by the NSW Aboriginal Land Council. He is the former and founding editor of the National Indigenous Times newspaper and has twice won the Human Rights Award, plus a Walkley Award and a Walkley High Commendation for his Indigenous affairs reporting.

You can find out more about Turnstyle at turnstyle.org.au. We are run completely by volunteers and donations to cover costs. To be added or removed from the Turnstyle email list,
please email turnstylecommunity@gmail.com.

One response to “Lies that fed the NT Intervention.”