“In Politics there is no such thing as the Centre” —visiting Guatemalan revolutionary, Walter Felix, at the TLC [QCU, sic] Brisbane in September 2009.

“In hollows behind outhouses
or back of a wall of pepper tree, tanks
are sleeping, stirring.
They expand, become nervous and rough,
and grinning with iron dimples
begin to move out to the edge of town
to wait for the lorry to place unknown.”
—Rhyll McMaster

Quoting from Towards Peace – a Workers Journey by Phil O’Brien & Bernie Dowling.

When groupers were powerful in the ALP, the world peace council along with most peace organisations were proscribed by the Labor party. Bill Morrow, who went to serve Tasmania as an ALP senator, had his pre-selection vetoed, when he refused to cut his ties with the peace movement.

Norma Chalmers was one of those who was honoured as a World Peace Councillor.” 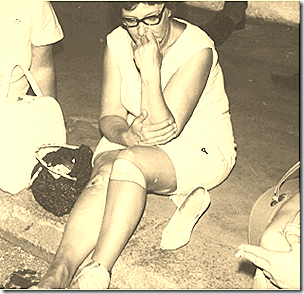 Norma Chalmers, sitting on the footpath in George Street, contemplates her bruised knees, torn stockings and broken ankle after Anti-Vietnam War rally in Brisbane in 1967 (thanks to Fryer Library at UQ for photo)

Historically, this was the time of the Great Leap Forward.

Phil O’Brien in his book “Towards Peace – a Workers Journey” describes how Norma Chalmers was injured during a demonstration against a visit to Brisbane, Australia, of former South Vietnamese vice president Ky in January 1967.

Norma’s husband, Heck Chlamers, an ex-POW in Singapore and the department head of a leading Brisbane insurance company, was arrested during the demonstration.

He was later fined for assaulting special branch detective, Don Lane (‘Shady’ Lane, one of two liberal MLAs who enabled Bjelke-Petersen to rule in his own right 1983-1989, was later disgraced and jailed for corruption).

When Phil O’Brien saw Heck, Don Lane had him in a head lock.

Heck was a quiet and gentle person unlikely to assault anyone.

Bad luck continued for the Chlamers when Norma, Secretary of the Peace Movement, sustained injuries including a fractured heel after being removed from Lennon’s Hotel by police during the Ky visit.

Source: Towards Peace by Phil O’Brien and Bernie Dowling.

Here are more links that realte to Norma Chalmers:

Thanks to Jim Sharp for reminding me of this story, Ted Reithmuller for the photo of Norma meeting Chow En Lai and Peter Gray for the links.

This entry was posted in No War, Political Stories, Popular Culture, Recent. Bookmark the permalink.