Posted on February 28, 2007 by Workers BushTelegraph | Leave a comment

In 1976 a group of 31 Chilean families were taken to the Wacol Hostel in Brisbane. This was to be the basis of a story written by one of the refugees, Marcial Parada, in “Vuelo Lan Chile 1131” [Flight from Chile in 1976].

Accommodation at Wacol was poor and expenses were charged to refugees for that accommodation by a private contractor for the Australian Government (Commonwealth Hostels Ltd) in November 1976 (note the charges were based on the then National Wage Case).
The nature of this accommodation for the Chilean refugees may provide comparison on the holding of refugees in places like Baxter and Villawood in recent years under current refugee policy by the Australian government.

Much has been made of help that was given by successive Australian governments to refugees from Vietnam and elsewhere in the 1970/80s. See the speech from Senator Mason from Qld on 26 Feb 2007 in the federal parliament:


Senator MASON (Queensland) (4.05 pm)—Any suggestion that Australia would agree to an arrangement which would see refugees returned to a country where they face persecution is wrong. Citizens of other countries who are persecuted by their governments should, in an ideal world, always find safe haven. This country has a very proud record of that, particularly since the Second World War. After revolution in places like Hungary and Czechoslovakia, when there was revolution and after the Indochina war, this country took many refugees—I might add, despite Mr Whitlam’s objection to taking Vietnamese refugees. Under Mr Fraser, this country did take them, and it was one of the best things we have ever done as a community.


The stark reality of how little was actually done to help refugees is evidenced in Marcial Parada’s story (soon-to-be-published on BushTelegraph website) about the Chilean migrants at Wacol Hostel (Vuelo Lan Chile 1131).

Documents from the time referred to by Senator Mason demonstrate how inaccurate his statement to parliament were. He does not mention the Fraser Government’s treatment of Chilean Refugees who arrived at the same time as Vietnamese Boat People. The attached minutes of a Chile Solidarity Committee meeting indicate that refugees were placed under deportation orders in 1976/77 by the immigration minister in the Fraser government. 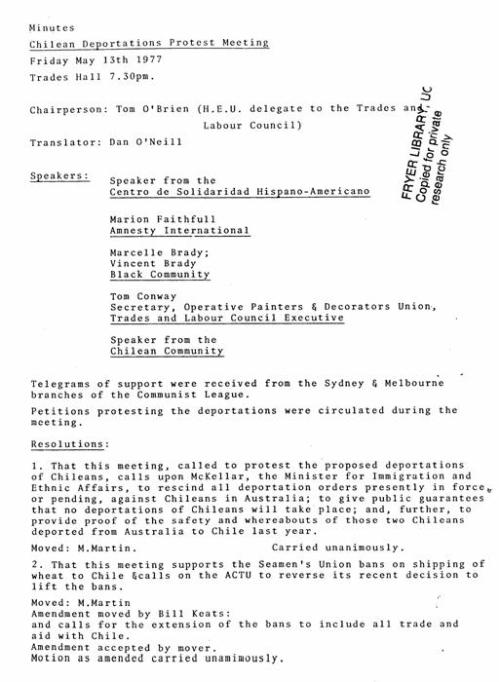 People were sent to Chile where there was continuing persecution under Pinochet. [See the first resolution of the Minutes taken from a Chile Solidarity Meeting in that year.]

But the historical facts are easily passed over in the 3 year cycle parliamentary system that we live under.

Nothing much has changed in aid to refugees over the past 30 years. Not by Whitlam, nor by Fraser, not by Hawke, Keating or Howard governments.

It took action by skilled workers from Chile in 1976/77 to escape from Chile, to improve their own lot, learn a new language and culture, to find suitable accommodation and work. This is the struggle of workers who take refuge from military dictatorships like Pinochet’s.

The historic truth is successive governments (Labor and Liberal) did their best to do as little as was possible for refugees in the 1970s and 1980s. This is often forgotten in the political rhetoric that we hear today from people of all political persuasions, both past and present

Here is an excerpt from the Preface to “Vuelo Lan Chile 113″1 by Dan O’Neill who acted as a translator for the refugees in 1976/77. O’Neill makes a comparison between then and now:

… it’s good to be reminded of how much Australia is the product of people who came here because they were fleeing, voluntarily or enforcedly, disorder, disaster, or some other desperate state of affairs in some other part of the world. This didn’t even begin with 1788. If you can believe the educated surmises of Anthropologists, it began with the indigenous inhabitants who weren’t always so indigenous to this particular bit of the world.

So, in a way, you can read this brief history of one tumultuous year in the life of a group of Chilean migrants in Wacol Hostel as a parable of what it is for any of the groups who have come here for the last 40.000 years to learn to get along in and with the country and its existing inhabitants, flora, fauna and human. There’s meaning in all the parts of Marcial’s story -the way the kids leave home easier and feel at home here quicker, the fight between the Chileans and the Vietnamese in the Hostel, the political differences that are swift to emerge within the group of Chileans themselves.

This entry was posted in Categories. Bookmark the permalink.